Australia: Couples Get 'teary' As Weddings Get Cancelled Amid Coronavirus Pandemic

As Australia govt announced a restriction on gatherings of more than 100 people, the multi-million-dollar wedding industry in the country has been affected

As the Australian government announced a restriction on gatherings of more than 100 people, the multi-million-dollar wedding industry in the country has been affected. The government's measure to contain the spread of coronavirus has left many tearful couples to cancel the big day. Not only the couples, but the new measure has also affected the florists and photographers, who were working in the industry as the weddings were put off indefinitely.

While speaking to an international media outlet, a Sydney-based wedding planner Lara Beesley said that she is not just dealing with the weddings getting cancelled, but she also has to deal with people who had been dreaming and thinking about the day non-stop. She further added that it is ‘heartbreaking’ to see and to receive ‘lots of teary phone calls’. As per reports, the outbreak and the new rules have thrown the wedding industry, worth approximately AUD four billion a year, into limbo.

READ: Coronavirus: Passengers From Australia, UK, US To Be Screened At 30 Airports 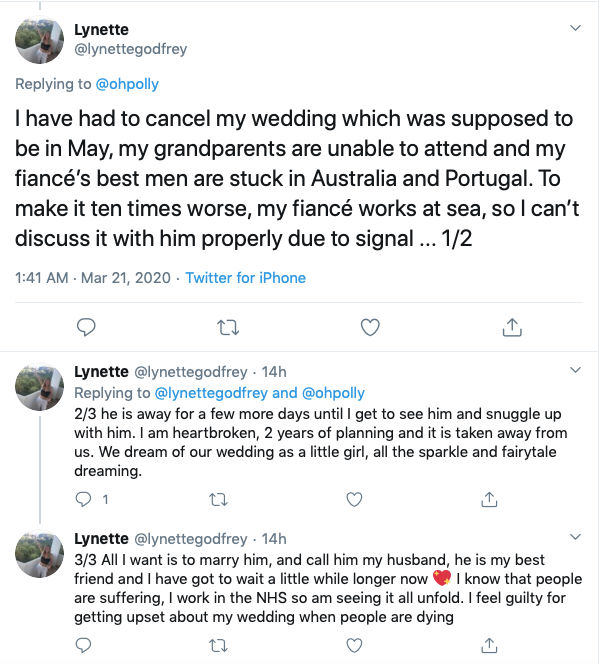 My sister @broadway_sophie had to cancel their wedding as my brother and nieces couldn’t fly over from Australia! Nieces have been counting down from 270 days ago, was 1 week away! They’re so heartbroken.

So it just occurred to me that because we can't have gathering of more than 100 people in Australia some poor brides would have had to cancel their weddings. That is so sad!!!

Australia has instituted a level 4 travel ban and my daughter (who lives in Melbourne) will likely have to postpone or cancel her June wedding. So that sucks.

According to an international media outlet, a total of 35 cases of the virus had been traced back to the wedding south of Sydney earlier this month. After the confirmation of the coronavirus patients, the Australian government urged couples to consider postponing or hosting smaller events. The confirmed cases in the nation have also been increasing rapidly. Currently, Australia has more than 1,000 confirmed coronavirus cases and the deadly virus has also claimed seven lives in the region.

Australia has reportedly also declared a ‘human biodiversity emergency’ as it prohibited citizens against travelling overseas and banned all non-essential gatherings. Earlier this week, Morrison made a formal declaration for Australians to ‘mandatorily’ abandon travel and movements saying that the coronavirus pandemic could last six months. According to the reports, the declaration gives the right to the government to cordon off cities or even regions, impose curfews and order
Australians to quarantine, with or without consent, if deemed necessary to contain the pandemic.

"The travel advice to every Australian is 'Do not travel abroad. Do not go overseas.' That is very clear instruction," PM Morrison said. “We haven't seen this sort of thing in Australia since the end of the First World War. This is a once in 100-year type event. We are looking at a situation of at least six months for how we deal with this. It could be much longer than that. It could be shorter. That is unlikely, given the way we are seeing events unfold”.

"Life is changing in Australia, as it is changing all around the world. Life is going to continue to change." Morrison further added saying, “ I can't be more blunt about it. Stop it. It is not sensible, it is not helpful and it has been one of the most disappointing things I have seen in Australian behaviour in response to this crisis.”