Cuba on Saturday announced that it has signed a bilateral agreement with Iran to test the efficacy of its homegrown COVID-19 vaccine.

Cuba announced on Saturday that it has signed a bilateral agreement with Iran to test the efficacy of its homegrown COVID-19 vaccine. The agreement has been signed between Cuba's state-run Finlay Vaccine Institute (IFV) and Pasteur Institute of Iran, which will see the Phase three clinical trial of its vaccine in the Islamic Republic. IFV in a statement said that the agreement will complement the clinical evidence of its vaccine candidate Soberana02 and will allow both countries to move faster with the immunisation process. 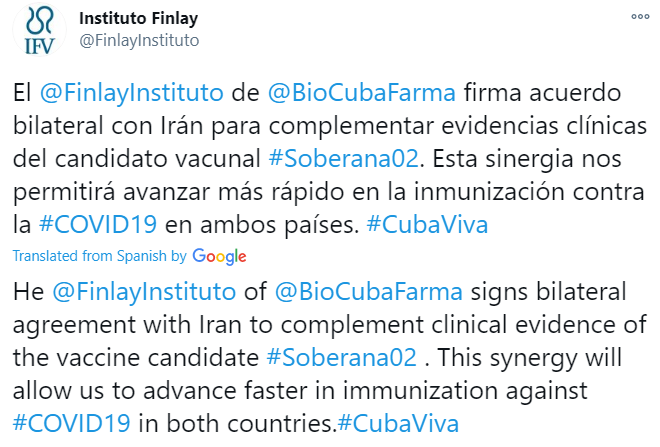 "The Pasteur Institute of Iran has a long history of collaboration with BioCubaFarma. Today the ties of friendship between our two countries are strengthened with a new agreement related to the vaccine Soberana02 of the Finlay Institute," said BioCubaFarma in a tweet. Finlay Vaccine Institute is one of the BioCubaFarma institutions.

Read: Iran Is In 'no Rush' To See US Return To 2015 Nuclear Agreement, Says Khamenei

The agreement between Havana and Tehran comes a day after Iran's Supreme Leader Ayatollah Ali Khamenei said that his country will not import COVID-19 vaccines from the United States and Britain because of trust issues. Khamenei, during a live televised speech, said that COVID-19 vaccines from the US and Britain are forbidden, calling them "completely untrustworthy". Communist Cuba is considered arch-rival of the United States in the Americas because of the former siding with Russia during the Cold War in the 20th century.

Cuba has already completed Phase 1 and Phase 2 trials of the Soberana02 vaccine in the country, which, as per the IFV, triggers an immune response in 14 days. According to the World Health Organisation (WHO), the Finlay Vaccine Institute, established in the early 1990s, is a leader in Cuban health technology, producing various vaccines such as the tetanus vaccine vax-TET and a combination vaccine against tetanus and diphtheria. Earlier, the director of the Finlay Institute, Doctor of Science Vicente Vérez had said that they are preparing to conduct a trial of the Soberana02 vaccine abroad.