Footage Of Mysterious Lights Glowing Above The Ocean Trends Online

Just as the craze for seeing aliens in Area 51 subsided, new footage from the coast of North Carolina the USA has shown what alien conspiracy theorists say is a 'fleet' of UFOs. The video has gone viral and the internet community is reacting to the sighting with the best of comments.

Footage of a fleet of UFOs

A user named Wiliam Guy took the short video off the North Carolina coast in the US and was questioning as to what are the bright orange-yellow lights on the coast. In the video, he can be heard saying "what is that"?. As he pans the camera Mr Guy says that look, nothing in the sky, at all". (sic) Then as the "fleet" comes into the frame he says, "Can anybody tell me what that is? We're in the middle of the ocean, on a ferry. There's nothing around, no land, no nothing. His questions were eventually answered by UFO conspiracy online community. Several of the YouTube channels were seen sharing this footage as 'fleet of UFOs.'

The video has amassed around 75,000 views on YouTube at the time of this publication.

One user commented "ok this 1 is intriguing gone frame by frame, nothing to suggest that its CGI so far.. so genuine objects flares? hmm flares would descend slightly, wouldn't be that bright at sunset.. there would be evidence of a plane nearby too since this r not beyond the horizon" and later offered his analysis.

in my analysis i noticed that they pulsate in some sort of alternating pattern, whether that pattern is caused from individual objects pulsating and aligning with others or is there some coherence to their pulsating idk hard to determine from the short video? 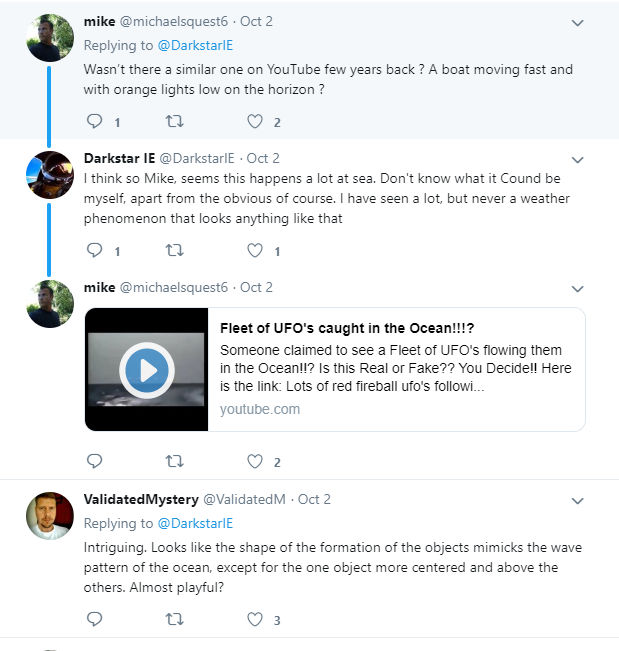