Japanese tourists were charged a princely sum of $500 at Antico Caffè di Marte restaurant near Castel Sant'Angelo in Rome, all for ordering two plates of spaghetti and fish along with two glasses of water, it has emerged. Afterwards, one of the tourists posted the image of the bill online which instantly went viral, akin to how actor Rahul Bose's Rs 400 bill for two bananas had in India. Meanwhile, Netizens have had hilarious reactions to the incident.

A picture of $500 bill was posted by two Japanese tourists after they claim they were charged way too much for two plates of spaghetti and fish, and water. The restaurant in question is  Antico Caffè di Marte restaurant near Castel Sant'Angelo, the photo was posted on Facebook earlier in September. Adding to the  €349.50 total for food, the tourists were charged an extra €80 for the tip. The tweet about the incident in English reads as- A rip-off for a Japanese again in a restaurant in Rome! Seeing this, it was 429 euros for the two of them to go! Moreover, the tip was charged at the time of payment (80 euros), and he was threatened not to return until he paid. The place is Antico Caffè di Marte (near Castel Sant'Angelo)! Never go!

Read: Noida: Fly Dining Is A Perfect Spot For Food And Adventure At 160 Feet

Read: Ways To Resist Food Cravings While On A Strict Diet

Meanwhile, netizens have reacted to this incident with hilarious comments. One user commented “Spaghetti and fish? Should have charged them with a crime”. “But I mean it was the BEST Griliana Mista I've ever had.” said another user. One user commented “In Florence, I got a much smaller portion than the one for local people... I ordered exactly the same one... They said the Japanese don’t eat a lot but I eat a lot! Such a con.” Another user said that “Well how big were the fish? 🤣 “ 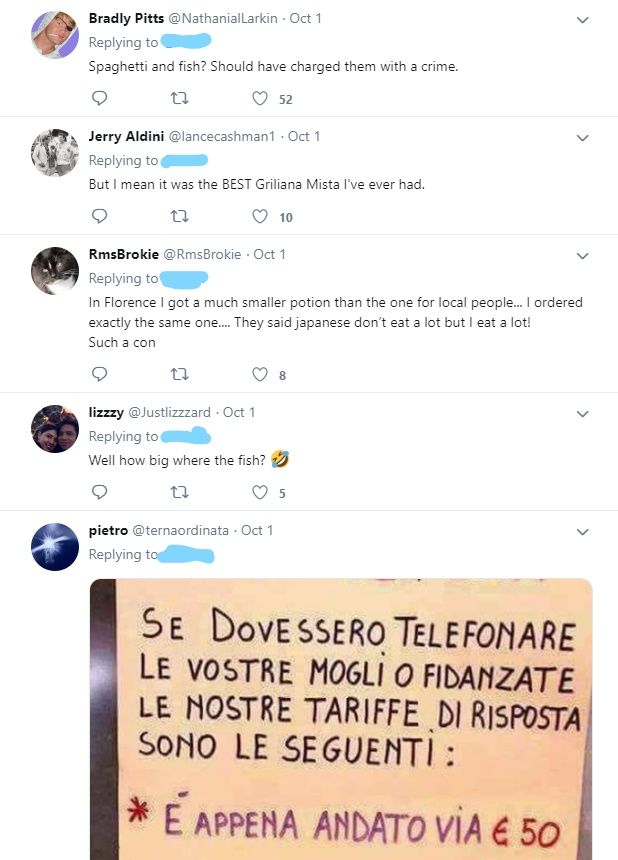 I was charged $60 for 3 Gellato in Florence. Same order everywhere else was $15. Of course no prices were displayed and the kids already had the Gellato. Little shop on the Ponte Vecchio bridge about midspan. She made me come behind the counter to pay so others didn't hear.