The teen climate activist Greta Thunberg faced yet another wave of criticism over her Twitter post about German trains being 'overcrowded' on December 14.

The teen climate activist Greta Thunberg faced yet another wave of criticism over her Twitter post about German trains on December 14. Thunberg, who is currently on her way back home after tireless protests around the world had posted a picture sitting on the floor with luggage and called trains in Germany as 'overcrowded'. However, quickly after her post, the German rail company tweeted to put an end on the speculations of Thunberg's travel in their 'eco-friendly' trains and claimed that 'it would have been nicer' if Thunberg had mentioned that she travelled in first-class.

Traveling on overcrowded trains through Germany. And I’m finally on my way home! pic.twitter.com/ssfLCPsR8o 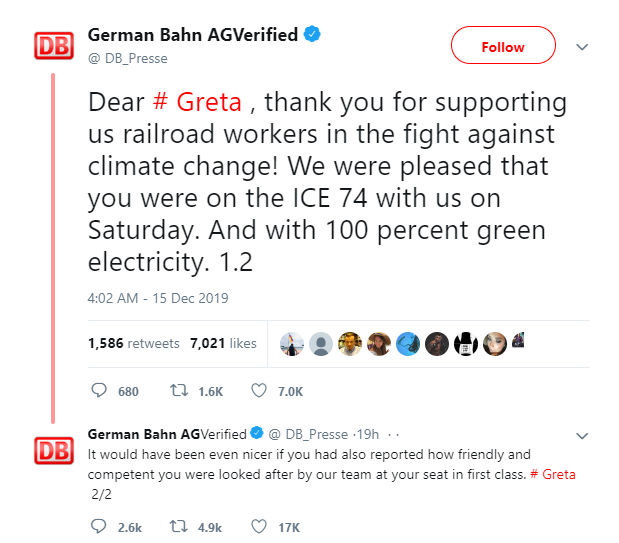 As soon as the clarification was made by the rail company, Thunberg faced harsh criticism for 'acting' or 'lying' in order to push her agenda. The 16-year-old environmentalist then said that 'overcrowded trains is a great sign' and broke down her journey. Thunberg claimed that her train from Basel was taken out, therefore for two different trains, she sat on the floor. It was only after Göttingen that she got the seat that the company mentioned.

OMG even German Rail companies are now dunking on the fraud that is @GretaThunberg! 🤣 pic.twitter.com/aAQjJJNWAt

It seems Greta is now telling a few untruths to further her agenda. The German National train service were forced to publicly correct her untruths after they were condemned on twitter because Greta suggested she was forced to sit on the foor, when in fact she was in 1st class. pic.twitter.com/IYl4g8YYjY

Read - Greta Thunberg Apologizes For ‘against The Wall’ Comment

Our train from Basel was taken out of traffic. So we sat on the floor on 2 different trains. After Göttingen I got a seat.This is no problem of course and I never said it was. Overcrowded trains is a great sign because it means the demand for train travel is high!

Thunberg has declared that she will take a 'holiday break' on December 13 in Turin. While talking to the reporters at the end of her rally, Thunberg said that 'you need to take rest' or else the activists will be unable to do this 'all the time'. The tireless 16-year-old has been protesting all over the world, urging students to go on 'climate strike' on Fridays and has travelled to several countries in an environment-friendly mode of conveyance. Finally, after a year, Thunberg has announced to take a break from all the protesting and go home.

Thunberg further said that 2019 is almost over and the environmentalist wants 2020 to be the 'year of action'. She hopes to bend the global emissions curve by putting 'pressure' on those who are in power and make sure that they 'act' and 'take full responsibility'.

Read - Thunberg Calls For 'fight For Tomorrow' At Italy Protest