To bolster bilateral ties amid the AUKUS pact row, Japan and France have decided to engage in 2+2 Ministerial security talks by the end of 2021 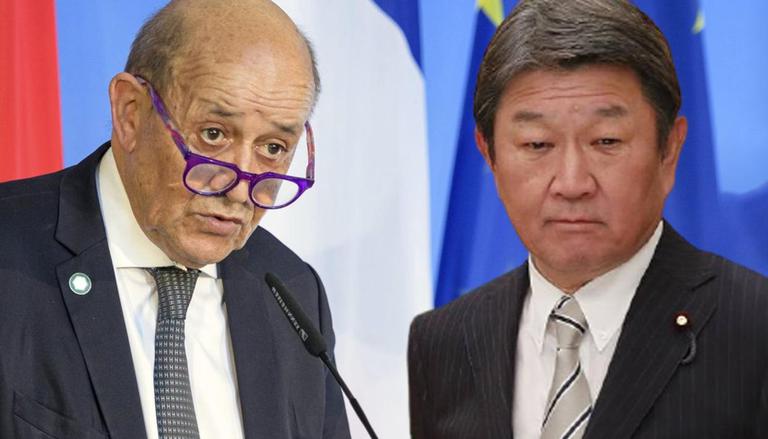 
With an eye to bolstering bilateral ties amid the AUKUS pact row, Japan and France have decided to engage in 2+2 Ministerial security talks by the end of 2021, Kyodo News reported quoting the French government as said on Tuesday. As per sources close to the government, the bilateral talks will be held in Japan's capital Tokyo by late November or early December, Kyodo added. The meetings will be attended by French Foreign Minister Jean-Yves Le Drian and Defence Minister Florence Parly.

Meanwhile,  French Foreign Ministry Director-General for political affairs Phillipe Errera and Defence Ministry Direct-general for international relations Alice Guitton met their Japanese counterparts on Tuesday to set the groundwork for the 2+2 bilateral talks to be held by the end of the year. It is to be noted that in July, Japan's ex-Prime Minister Yoshihide Suga and French President Emmanuel Macron met to reaffirm security cooperation for a "free and open" Indo-Pacific region. The meeting came amid China's aggressive behaviour and assertive territorial claims in the Southeast Asian region.

On being blind-sighted by the US, UK and Australia over the AUKUS Pact, France has been engaging in bolstering ties with Japan and India. Speaking at a presser in Tokyo on Tuesday Errera told reporters that Paris was not only "shocked" by the trilateral partnership but also faced a considerable loss. "What is at stake is what kind of Franco-American and Trans-Atlantic partnerships, particularly in relation to the Indo-Pacific, there should be," Nikkei Asia reported quoting the diplomat.

The AUKUS row between the US and France?

The AUKUS pact has led France to incur a loss of $65 billion on its defence deal, under which it sold conventional diesel-powered submarines to Australia. Additionally, France was appraised about the deal just hours ahead of its official announcement.

It is noteworthy that France has remained outspoken on its expectations from the US regarding the restoration of the relationship. On September 22, US President Joe Biden and his French counterpart Emmanuel Macron jointly opted for "open consultations" for a way forward, BBC reported. Both the country leaders are scheduled to meet by the end of this month. Notably, while Paris has asserted that only "time and action" will heal the tattered ties, Biden's officials have expressed will to commit to the approach.

Aiming to "build together" for ensuring a free and open Indo-Pacific region amid Chinese aggression, France has also made prominent moves earlier in the year. In February, it sent a nuclear-powered submarine through the disputed South China Sea. In May it participated in joint maritime exercises with the US, Japan and Australia off the coast of the Southern Japanese island of Kyushu.