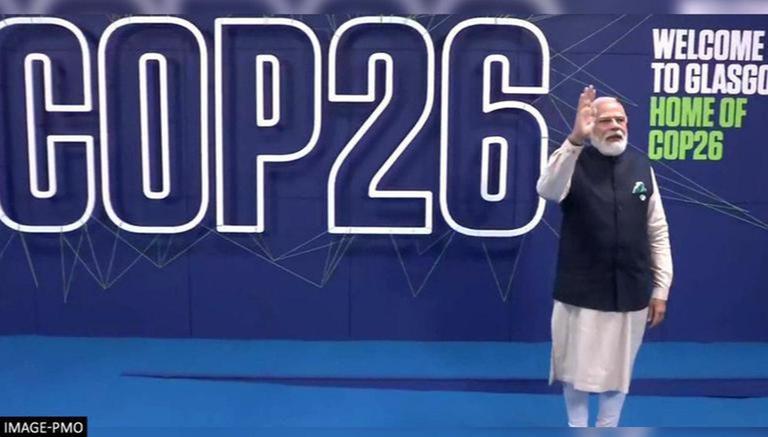 
Prime Minister Narendra Modi made the pledge of India cutting its emissions to net-zero by 2070 at the United Nations Climate change conference or COP26. While delivering the national statement to an audience of at least 130 world leaders, PM Modi revealed India’s ‘Panchamrit’ approach to tackle climate change including the promise of achieving net-zero by 2070. Among other elements, the Prime Minister said that by 2030, India will reduce the carbon intensity of its economy by less than 45%. He also called on tracking the “progress made in climate mitigation, we should also track climate finance.”

PM Modi said, “In the midst of this global brainstorming on climate change, on behalf of India, I would like to present five nectar elements, Panchamrit, to deal with this challenge. First– India will reach its non-fossil energy capacity to 500 GW by 2030. Second– India will meet 50% of its energy requirements from renewable energy by 2030."

He added, “Third– India will reduce the total projected carbon emissions by one billion tonnes from now onwards till 2030. Fourth– By 2030, India will reduce the carbon intensity of its economy by less than 45%. And fifth- by the year 2070, India will achieve the target of Net Zero. These panchamrits will be an unprecedented contribution of India to climate action.”

What does it mean to achieve net-zero?

Reaching net-zero emissions has dominated the global community’s talks to tackle the grim situation of the climate crisis for a significant amount of time. ‘Net zero’ or reaching ‘carbon neutral’ implies not adding to the level of greenhouse gases in the atmosphere. While India has promised to reach carbon neutrality by 2070, China has announced plans to attain the same goal by 2060. Meanwhile, the United States and the European Union (EU) have revealed that they aim to hit net zero by 2050.

In other words, net-zero means striking a balance between the number of greenhouse gases generated and the amount removed from the atmosphere. Because the amount added does not exceed the amount which was received, a nation reaches net zero. Now, more and more nations are taking responsibility for reducing or eliminating all man-made greenhouse gas emissions from the atmosphere through a range of measures for mitigation. This is how the earth’s net climate balance stays at zero.

How to achieve net-zero?

Keeping in mind the situation of the ever-warming planet Earth, there are just two basic steps to reach the net-zero goal and one of them is for the nation to reduce the level of emissions which is being sent out in the atmosphere. The activities that send most greenhouse gases into the atmosphere include industrial processes, power generation, transport and intensive agriculture. Another step of achieving net-zero include removing the emissions from the atmosphere by measures such as planting more trees, capturing carbon created during the processes before it is sent out into the atmosphere.

It is pertinent to note that ‘net zero’ and ‘global net zero’ are not the same. The entire concept of ‘Global net zero’ was introduced only this year. It implies that the ‘developed’ nations who have already gained a lot more in the past, should bear the burden of emission reduction as compared to the ‘developing’ nations in a bid the help the nations falling in the latter category. This is how ‘developing’ nations would achieve getting the status of being ‘developed.’ India’s is presently the world’s fourth-biggest emitter of carbon dioxide after China, the US and the EU.