Kremlin on Wednesday said that there were no legal grounds to release Moscow’s critic Alexei Navalny, rejecting a call from the European Court of Human Rights (ECHR) that asked for Putin's political rival’s immediate release. Earlier on February 17, a Strasbourg-based court ruled that Russia must free the jailed opposition figure Alexei Navalny as his life was in danger under detention. In a statement to Russia’s Interfax news agency, Moscow’s Justice Minister Konstantin Chuychenko said that ECHR’s demands were highly “unreasonable and unlawful” and depict “clear and gross interference” in Russia’s judiciary system and domestic matters. Furthermore, calling the EU court’s demand “deliberately unenforceable” Chuychenko said that the ruling contradicted Russia’s interest and was not in accordance with the country’s law.

Earlier, giving the verdict on Navalny’s release, the EU human rights court had warned Moscow, saying that the non-compliance of the European human rights convention would be considered a breach of international law. However, Russia called the EU court’s decision a “western meddling in the country’s internal issue’. Kremlin had earlier initiated a trial of the anti-corruption campaigner Navalny in Russia’s makeshift court for slandering WWII veterans, following his sentence for flouting the suspended parole in 2014 on embezzlement case conviction, for which, a Moscow court handed him a 2.5-year prison term. 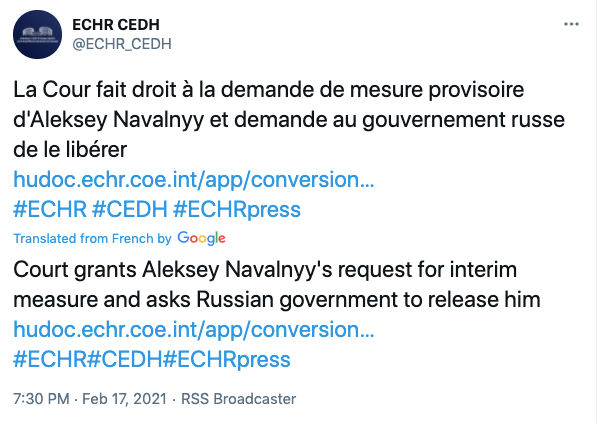 According to Russia’s state-run agency, TASS, Russia sentenced Navalny for "discrediting the honour and dignity" of the 95-year-old war veteran who was filmed in a pro-Kremlin video that surfaced online. The political contender, according to the prosecutors, had launched controversial tweets, describing the ex-military personnel "the shame of the country," “corrupt lackeys” and “traitors.  Navalny was arrested on Jan. 17 after his arrival in Russia, following his recovery in Germany from the Soviet era nerve toxin ‘Novichok’ poisoning. The opposition leader’s detention, which the supporters called ‘politically motivated’ by Russian President Vladimir Putin, led to widespread nationwide protests as citizens congregated on the streets in several thousand, demanding Navalny’s release.