Saudi Princess Basmah bint Saud, who was detained without any charges, made a public appeal to be released from jail in a letter posted online on April 16.

In an unprecedented turn of events revealing the instability of Saudi royal family, a prominent princess of the kingdom, Princess Basmah bint Saud, who was detained without any charges, made a public appeal to be released from jail in a letter on April 16. The Saudi Princess took to Twitter to post, which is now deleted, about how her “health is deteriorating” and cited medical complications for her freedom from the high-security prison. The 56-year-old was arrested in March 2019 just before she was travelling to Switzerland, reportedly for medical treatment.

The public plea by the Saudi Princess came a month after Saudi King Salman’s nephew Prince Ahmed bin Abdulaziz al-Saud, and the king's brother, Prince Mohammed bin Nayef, were detained reportedly in an attempt to stamp out internal dissent. In the post, Princess Basmah said that she was being held in prison “without criminal, or otherwise any charges” and confessed that her medical condition might lead to her death. She also explained how the letters sent by her to the Royal Court have been left unanswered and she has not received any medical care while in the prison. The Saudi Princess claimed that she was “thrown into prison” after being “abducted without an explanation” along with one of her daughters. 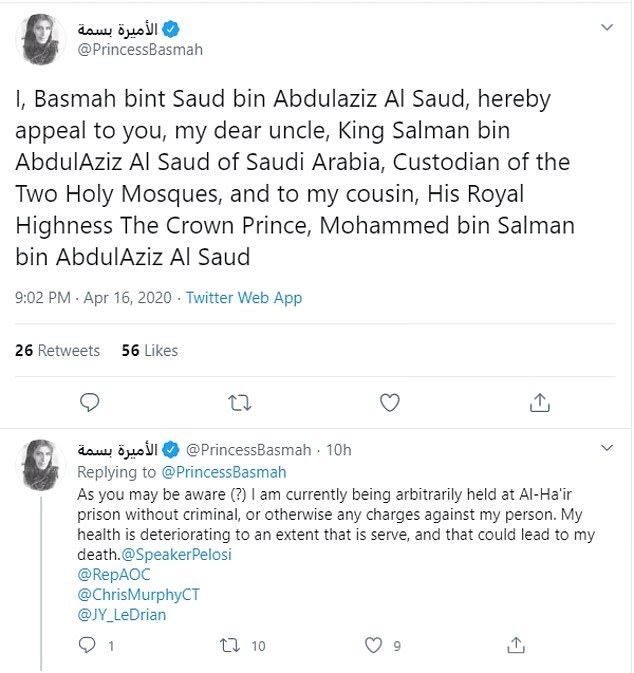 The public appeal by Saudi Prince came when at least 150 people from Saudi Arabia royal family are believed to have contracted the fatal COVID-19. After nearly six weeks since the Kingdom confirmed its first case of coronavirus infection, an internal message of The Elite Medical and Surgical Center in Riyadh seen by an international media outlet revealed that the hospital is currently preparing 500 beds to treat a foreseeable influx of COVID-19 patients from the royal family and cited “extreme alert”

First reported by an international media outlet on April 8, the directives have been given to hospital authorities that treats the members from Al-Saud clan “for VIPs around the country”. Meanwhile, a senior Saudi prince, governor of Riyadh is currently in the intensive care unit with coronavirus infection along with several dozens of others of the royal family who have also contracted COVID-19. The directive reportedly even said that sick members from the hospital’s staff would now be treated at an apparently less elite hospital to make space for the ones from the royal family.

PEOPLE HAVE PLEDGED SO FAR
LATEST NEWS
View all
28 mins ago
Greece: Tourists from 29 countries can fly in as of June 15
35 mins ago
COVID-19: South Korea plans to import remdesivir amid fear of second wave
13 mins ago
Turkey reopens some mosques amid infection slowdown
55 mins ago
Hostel at North Korean embassy in Berlin closed for good
22 mins ago
Tanzania leader banned from making statements ahead of polls