Scientists in China suggested that coronavirus could have originated from fruit bats as well as recent videos of people having bat soup have been shared online.

A new outbreak of a mysterious Coronavirus that originated in China's Wuhan has raised numerous fears, as medical professionals and scientists are struggling to find out the origin of the virus. The newly discovered SARS-like virus that has triggered an outbreak of a deadly infectious respiratory illness in China was first reported back in December last year. Some scientists in China have reportedly suggested that the Coronavirus could have originated from fruit bats as recent videos of people having bat soup have been shared online.

According to a Chinese local media outlet, the Wuhan coronavirus' natural host could be bats. However, they also mention that the exact source is still not confirmed.

The report comes after a video of bat soup went viral on several social media platforms. 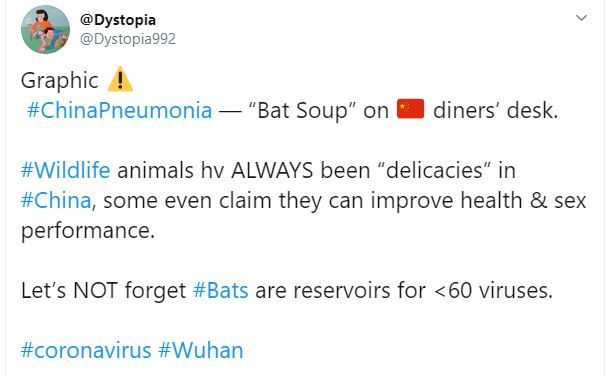 READ: EU To Sign Brexit Agreement; On Alert Over Coronavirus

In another recent report, the coronavirus, which has already infected hundreds of people and reportedly killed 17 people, is now believed to be originated from Chinese Krait and the Chinese cobra. The scientist now reportedly said that the original source of the virus is a snake, more specifically, the Taiwanese Krait or the Chinese Krait which is a highly venomous species of elapid snake found in much of central and southern China and Southeast Asia.

It was WHO which confirmed several cases of a novel coronavirus outside China, which is of the same family as the deadly SARS virus. The UN health agency had said that the person travelling from Wuhan, China was hospitalised in Thailand and is recovering from the illness. According to the organisation, novel coronavirus is a new strain in the large family of coronaviruses (CoV) which was not identified in humans before.

READ: India Offers To Host Olympic Qualifier If Shifted From China Due To Coronavirus Outbreak