A man’s recent move to eat idli dunked in tea has made the internet go berserk. This is the latest addition to the list of bizarre food combinations.

Man’s recent move to eat idli dunked in tea has made the internet go berserk. This is the latest addition to the list of bizarre food combinations which also includes chocolate pizza, milk Maggi, dosa masala burger. Sharing the video on a website, the man explained that he is new to India asking if it is the right way to eat it. The 8-second video features the person dunking a piece of idli in a cup of tea.

Hello, I'm new to India. I hope I'm doing this right. from india

While it is common to eat idli and sambar together, this user decided to take the oddity notch a bit higher. It did not take long for the netizens to notice it and respond to the user. Many users took the opportunity to question how it tasted together. Other called it an absurdity. However, some also played along and suggested the correct way of eating the two. One user wrote that the correct way of eating it is to pour the entire cup of tea on the Idli. Catch all the comments here: 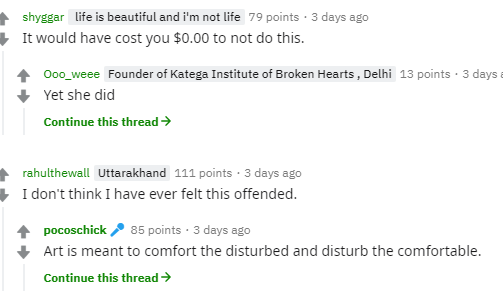 Meanwhile, an  82-year-old woman has captured the hearts of the people for selling her sought after idli's at Re.1 each. Ms. Kamalathal wakes up at 5am every day, and prepares her idli batter, and chutney too using a traditional grinding stone. She opens the doors for diners at 6am and closes at noon, sometimes sooner, depending on how much batter she is left with. Kamalathal has been serving up to 1000 idlis per day at the minimal cost Re.1/idli for years now. Recently, chairperson of the Mahindra Group, Anand Mahindra spotted her small business and made an earnest request on social media to help the Coimbatore Idli seller and offered to buy an LPG fueled stove for her.