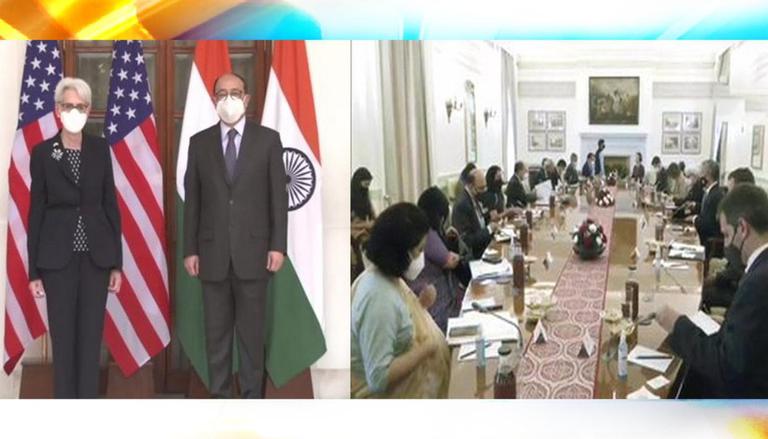 
On Wednesday, US Deputy Secretary of State Wendy Sherman met with Foreign Secretary Harsh Vardhan Shringla in New Delhi. She arrived in India on Tuesday, October 5 for her two days visit to review the bilateral agenda between India and the United States as well to discuss regional and global problems. During the meeting, Foreign Secretary Harsh Vardhan Shringla stated that the relationship between India and the United States has seen "quite consistent growth" in terms of substance and momentum over the last few years, reported news agency ANI.

Shringla also noted that the firm foundation in bilateral ties, as well as both countries' stable understanding and confidence, have led to more active and regular interactions on strategic interests and global concerns. India looks forward to continuing its positive and productive agenda at both the bilateral and quadrilateral levels, according to the Foreign Secretary. "As a result, we are looking forward to today's substantive discussion. We have a limited amount of time to cover a wide range of topics, including bilateral, regional, and international matters of mutual interest, as well as our immediate and extended neighbours, the Indo-Pacific, and other multilateral and international concerns of common interest," he added as reported by ANI.

Meanwhile, during her meeting with India's Foreign Secretary, Sherman stated that the cooperation between India and the United States is based on "shared values" as both countries are home to inventors and entrepreneurs. She went on to say that both nations believe in a free, open, integrated, and resilient Indo-Pacific region. "We both recognise that sustaining and strengthening the rules-based international order is the best approach to safeguard peace and prosperity in the Indo-Pacific region and around the world," she added as reported by ANI.

According to US Deputy Secretary of State, India and the United States have an "indispensable" collaboration that spans several dimensions and can solve any issue together. She went on to remark that Prime Minister Modi's recent visit to Washington, as well as the Quad leaders' conference a week ago, highlighted the importance of both countries' partnership. Sherman also praised India's decision to resume vaccine exports, calling it an important leader in the fight against the COVID-19 pandemic as the "world's largest vaccine producer." The US is looking forward to partnering with India to vaccinate the world, especially through the Quad vaccine collaboration, she added. It should be mentioned here that the meeting between the US Deputy Secretary of State and Foreign Secretary Shringla is taking place ahead of the two plus two ministerial dialogue, which is scheduled to take place later this year.

READ | Anthony Joshua vs Oleksandr Usyk: When and where to watch boxing fight in India, US & UK?