A 'shameless' motorist was caught in a video while driving through a huge puddle on a flooded street and soaking an elderly man standing on the footpath.

A 'shameless' motorist was caught in a video while driving through a huge puddle on a flooded street and soaking an elderly man standing on the footpath in New South Wales. The 23-second clip was posted by a Facebook user which further led to leaving several internet users in 'disgust'. Aaron McMohan not only filmed the incident where the car in front of him can be seen angling itself in the direction of the puddle, but he also claimed that the house of the old man was flooded.

The post by McMohan has been viewed by thousands of people and most of them were seen slamming the 'ignorant' driver. McMohan also zoomed in the video and posted that it was a car of 'central coast 4*4 and outdoor' which is a sporting goods company. Moreover, what the driver did was not illegal in New South Wales but police reportedly get involved if the driver goes through a puddle and wets people waiting at a bus stop.

If the old man was standing at the bus stop, the motorist could have been eligible for a fine of at least $200. According to the NSW law, the driver must take due care, by slowing down or stopping the driver's vehicle if necessary and not to splash mud on any person in or on a bus, or any person entering or leaving any stationary bus, or any person waiting at any bus stop.

Most Facebook users claimed that they had ringed the company and filed a complaint, while some users also claimed that the driver of that particular has been fired from his job. One of the internet users also accused McMohan of filming instead of helping out the old man, others suggested that he should have followed the driver and then confronted him.

Some people even posted screenshots of the company's Facebook page, who apparently has turned off their reviews based on the backlash they received. However, some believe it was not the 'correct approach'.

A Facebook user wrote, “Not fair that the business is getting drilled on the action of his employee.” 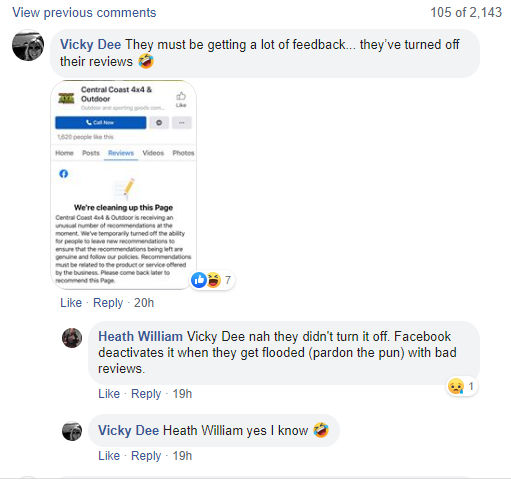