A coalition of Tibetan, Hong Kong and Uyghur communities in the UK is slated to hold a protest in central London on Friday against the Chinese government. 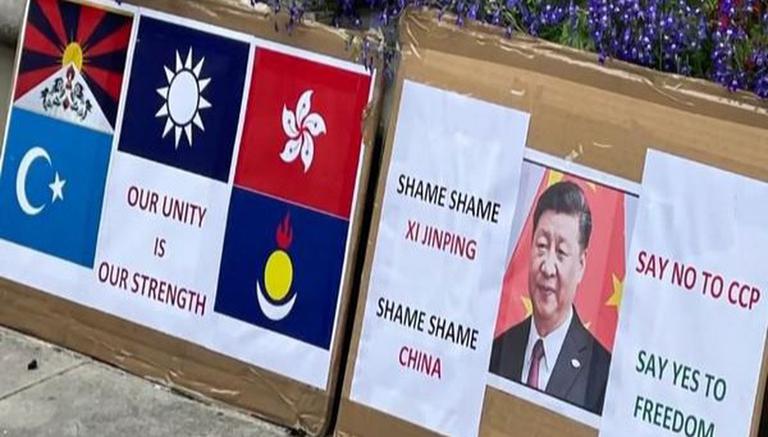 
As Beijing is gearing to mark the Peoples Republic of China's 72nd National Day on Friday, the communities which are suppressed through its draconian laws are set to hold a protest in central London. According to the press release, the coalition of Tibetan, Hong Kong and Uyghur communities will hold a protest in Central London to mark 70 years of China's oppression.
Notably, China celebrates the national day annually to commemorate the formal proclamation of the establishment of the People's Republic of China on October 1, 1949. According to the release, various rights organisations and NGOs based in the UK such as Free Tibet, World Uyghur Congress, Atlas and Global Alliance for Tibet & Persecuted Minorities are supporting the October 1 protest.

"A coalition of UK-based Tibetan, Hong Kong and Uyghur communities are staging a public protest in central London to highlight the CCP regime's continued brutal crackdown and curtailment of freedom of speech and human dignity in their countries," Global Alliance for Tibet & Persecuted Minorities said on its Facebook page."

It is worth noting that the Communist government in China has suppressed Xinjiang, Hong Kong and Tibet through its draconian laws over the years. Despite facing criticism, Beijing continues to suppress the minority communities. In Tibet, the Chinese Communist Party (CCP) ruling the hilly region since it has invaded the country in 1950. The local decision-making power is concentrated in the hands of Chinese party officials. The Xi Jinping led- CCP government has also been involved in suppressing Uyghur Muslims in Xinjiang by sending them to mass detention camps. Several media reports have shown how China imposed forced labour, systematic forced birth control, and separated children from incarcerated parents.

"Every year, the 1st of October is not a celebratory day for Uyghurs, but rather an occasion to reflect on all that we have lost at the hands of PRC governments – from our rights and freedoms to the lives of our loved ones”, WUC President, Dolkun Isa, said in a statement released on Thursday. "At the same time, this day has become symbolic for oppressed communities from China to join in solidarity and once more call for an end to the Uyghur genocide and China’s other human rights crimes." Irrespective of lakhs of claims, China always denied such reports and still journalists, NGOs and former detainees have been facing the brutal crackdown of the Chinese Communist Party. Earlier this month, the Tibetan Community of Switzerland and Liechtenstein (TCSL) held a peace march from the UN Office of High Commissioner for Human Rights to the office of the UN Human Rights Council in Geneva against China's human rights violation in Tibet.