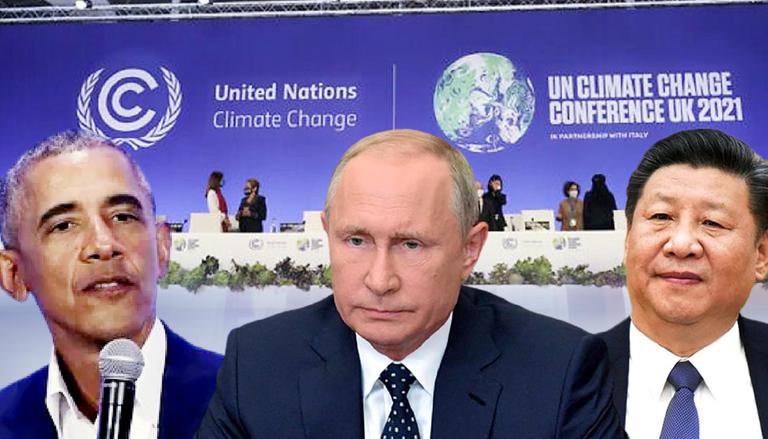 
Barack Obama, the former United States President and one of the leaders who paved the way for the historic 2015 Paris climate agreement, reprimanded China and Russia for skipping the Conference of Parties (COP26) in Glasgow, Scotland. Delivering a keynote address at the climate summit, Obama called out Chinese President Xi Jinping and Russian President Vladimir Putin for a "dangerous lack of urgency" on climate actions, including an absence of commitments on their own climate-wrecking emissions. Highlighting the lagging progress in commitments towards the Paris Agreement, Obama admitted that he had "images of dystopia" creeping into his dreams.

"It was particularly discouraging to see the leaders of two of the world’s largest emitters, China and Russia, declined even to attend the proceedings, and their national plans reflect what appears to be a dangerous lack of urgency,” the former American president said.

He clearly stated that the "added burden" to make sacrifices lies upon the wealthy nations who helped "precipitate the problem." However, giving hope towards the success of the UN Climate talks on Monday, Obama asserted that the Biden administration "will ultimately get" its $555 billion climate package through Congress. "It will set the United States on course to meet its new climate targets,” he said. Meanwhile, the redlines between the rich and poor countries that have emerged from time to time have remained "disappointing," Obama stated, while leaders at COP26 were updating the till-date progress in the talks.

On Monday, Obama also called on nations to ramp up actions against climate change and highlighted that "not enough was being done regarding the situation." It is to be noted that the Glasgow Climate Summit is the first such talk being attended by the former American President after he helped deliver the Paris Agreement in 2015. In the agreement, over 190 nations committed to cut dependence on fossil fuel usage and industrial and agricultural emissions to keep global warming below "catastrophic levels" of 1.5°C.

READ | Greta Thunberg slammed over her COP26 criticism, politicians affirm 'progress being made'

We’ve done some important work since the Paris Agreement was signed six year ago, but we’re still nowhere near where we need to be on climate. Watch live from #COP26 in Glasgow as I talk about the steps we can take to combat climate change. https://t.co/fpoGbnNehm

'Time is running out'

Highlighting the concerns raised by the world leaders present at the conference, the former US President also warned that "time really is running out" when it comes to climate. He also pointed out the failure in compiling collective and individual efforts to address the crisis. "We are going to have to do more, and whether that happens or not to a large degree is going to depend on you - not just you in this room but anybody who's watching or reading a transcript of what I am saying here today," he said. Obama further took a dig at his successor Donald Trump for "unilaterally pulling out" of the Paris Agreement and halting the overall progress.