Donald Trump who is known to take on his opponents on Twitter, recently targetted Democratic presidential candidate, Mike Bloomberg but later deleted it.

United States President Donald Trump who is known to take on his opponents on Twitter, recently targetted the former Democratic presidential candidate, Mike Bloomberg but later deleted the video. Trump had shared the clip of Bloomberg who dropped out of the race for the White House after Super Tuesday, who can be seen eating crust from a slice of pizza and then licking his fingers. The US President not only called him “Mini Mike” but also called him “unsanitary” and “dangerous”. Immediately after the video was shared, it started taking rounds and had gone viral, but he later deleted it. However, the video still remains on Donlad Trump Jr's profile, with the caption “disgusting”. 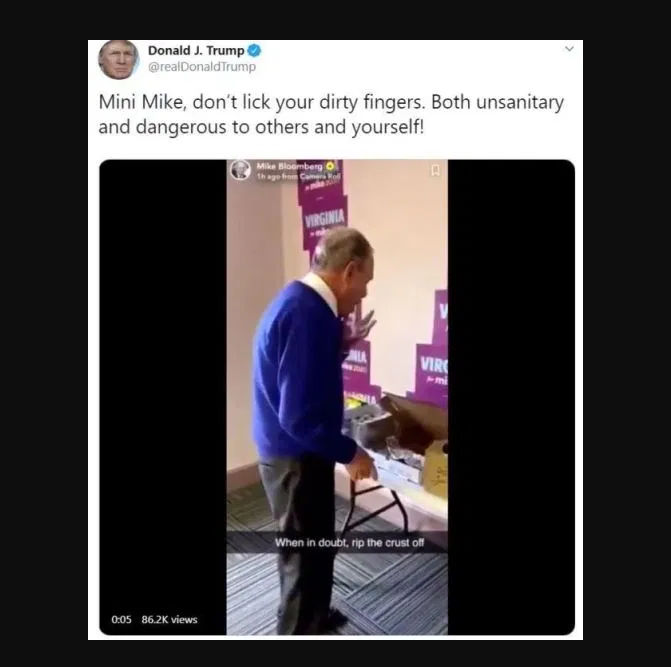 Truly disgusting! Also shows that #Bloomberg has never been around other people in a communal work space.

The fact that he and his “influencers” put this out thinking it normalizes him is even scarier.

Donald Trump had also taken another dig on Mike Bloomberg on March 3 by calling him as the “biggest loser” for his performance on Super Tuesday. He also targetted the $700 million Bloomberg's campaign invested in advertising. According to the Republican US President, it was “money down the drain” as Joe Biden and Bernie Sanders stole the show by winning in nine and four states in Democratic primaries. According to Trump, the Super Tuesday results were a "complete destruction" of Bloomberg's reputation.

The biggest loser tonight, by far, is Mini Mike Bloomberg. His “political” consultants took him for a ride. $700 million washed down the drain, and he got nothing for it but the nickname Mini Mike, and the complete destruction of his reputation. Way to go Mike!

Meanwhile, after Super Tuesday ended with Mike Bloomberg only winning one state in the face of 14 which went out for voting on March 3, he bid his farewell from the race and joined to endorse Joe Biden. In a massive development on March 4, the billionaire dropped out from the race and said in a statement that three months ago, he had joined the race to defeat the Republican US President and for the same reason he took the latest decision. According to Bloomberg, by “uniting” with Biden, he will endorse the “best shot” at defeating Trump.

After the biggest day in the United States Presidential elections, former US Vice President Joe Biden and US Senator Bernie Sanders have emerged as the frontrunners for the Democrats. The Democrats who had featured more than a half dozen candidates last week turned into a two-man contest between Biden and Sanders. Both have starkly different views regarding the future of the United States of America.

Read - Days After The Peace Deal, US President Donald Trump Had 'good Talk' With Taliban Leader