Greta Thunberg Holds Her Ground Against Trump, Twitterati Laud Her

Swedish Climate Activist Greta Thunberg had a unique responded to US President Donald Trump's attempt to mock her. She changed her Twitter bio to reflect Trump's jibe. Her Twitter handle now says, 'A very happy young girl looking forward to a bright and wonderful future.' 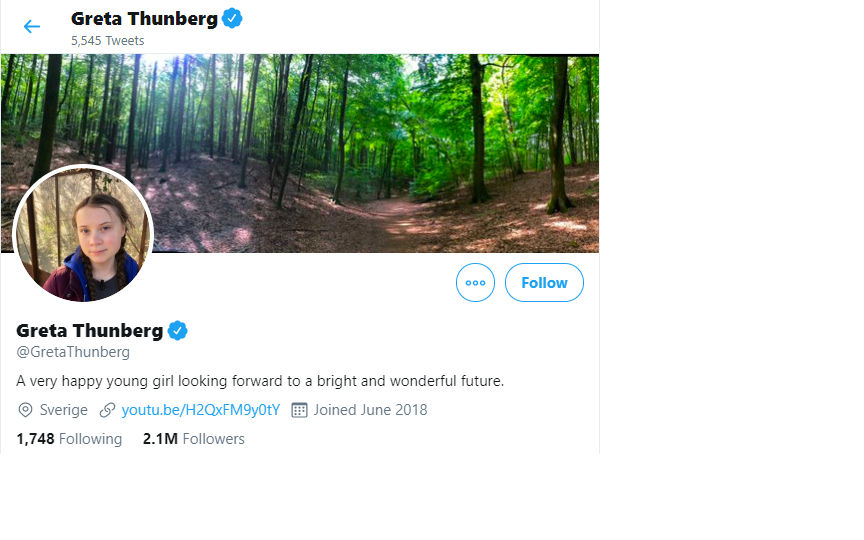 On September 24, Donald Trump had tweeted an excerpt of Greta Thunberg's UN Climate Action Summit speech, and had captioned it.

She seems like a very happy young girl looking forward to a bright and wonderful future. So nice to see! https://t.co/1tQG6QcVKO

Soon after, Greta Thunberg changed her profile to reflect what Trump had taunted her with.

Greta's response has garnered her respect and popularity across the social media spectrum. People are pointing it out and are clearly hailing the unperturbed manner with which Greta has responded to the US President.

#GretaThunberg has initiated her obliteration of Trump & I am here for every minute of it.#IStandWithGreta pic.twitter.com/hgvJskj0TG

Just when I thought she couldn’t get any cooler. #GretaThunberg pic.twitter.com/tkJTtpqEOm

Earlier, Greta's glare when she and Donald Trump crossed paths at the summit had gone viral on social media. Presidential Candidate for the Democrats, Julián Castro had even tweeted about the stare.

I think a lot of us can relate.

Trump has time and again questioned climate science and has expressed his reluctance to adopt any recommendations that the scientists offer. William Happer quitting the White House had been a primary example.

At the UN Climate Action Summit, addressing a room full of world leaders, the teenager asked, "How dare you?" saying that 'we' (the future generation) would 'never forgive' them if they failed her generation on climate change.

She said, "How dare you think that this can be sold as business as usual and some technical solutions. With today's emissions levels, that remaining CO2 budget will be entirely gone in less than eight and a half years. There will be no solutions or plans presented in lines with these figures here today. Because these numbers are too uncomfortable and you are still not mature enough to tell it like it is," said Greta Thunberg.

"You are failing us. But the young people are starting to understand your betrayal, the eyes of all the future generations are upon you and if you choose to fail us, I say we will never forgive you, we will not let you get away with this, right here, right now is where we draw the line. The world is waking up and change is coming. Whether you like it or not," she added.

READ | Priyanka Chopra thanks Greta Thunberg, says 'how dare we fail you'