'Glad You Didn't Spill Coke': Netizens React As Man Gets Trampled By Deer

A recent video which has surfaced online shows a man getting trampled by a suspect while he was leaving a restaurant in Locust, North Carolina. Watch video

A recent video which has surfaced online shows a man getting trampled by a deer while he was leaving a restaurant in Locust, North Carolina. According to international media reports, the man identified as Ken Worthy was leaving McDonald's with his wife and a Diet Coke in his hand when he saw something approaching him. The security video taken from the store showed the animal barreling toward Ken before jumping on him and continuing on.

The video was posted by Ken himself with a caption, “Deanne Dee Morgan Worthy and I were walking out of the McDonald's in Locust NC with Coke's in hand. What happened next I would have never believed. Life is crazy sometimes. God is good ALL the time! Not injured. PS: Didn't spill my coke! “.

While speaking to an international media outlet, Ken said, “I mean, just see the flash of him rolling over me and in a straight line, and he was gone”.

He further told the media outlet that what he saw wasn't a car, but a frenzied deer that had run likely from woods nearby, and it didn't stopped in it's way. The couple were surprised, but luckily weren't hurt during the incident. Ken also said that he didn't even spill his Diet Coke.

The video has now become an internet sensation as it has been viewed more than five lakh times. The 15-second video has also been shared nearly 5,000 times and has received thousands of comments and likes. One Facebook user wrote, “Glad you weren't hurt but I laughed so hard when I realized this was you!!!! I can't believe Dee didn't throw a body block for you”. Another said, “Wow. Took me a minute to figure out what ran you over”. “Oh, my heavens!! Where did he even come from at the McDonalds in locust?! He was lost & scared! I’m so glad you’re ok!!! And kinda impressed you didn’t spill your coke lol,” wrote another. 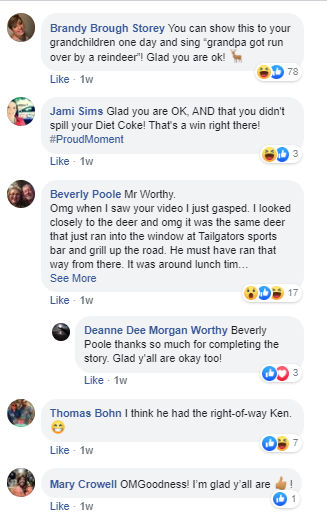 READ: Bloomberg Once Blamed End Of 'redlining' For 2008 Collapse