Meena Harris, niece of Democratic vice-presidential nominee Kamala Harris, triggered social media outrage after she shared a photoshopped image, which depicted Kamala Harris as Maa Durga. In the image, Kamala Harris was sitting on a lion with Joe Biden's face as she defeats an irate looking Donald Trump. "I am actually speechless, other than to say that the first day of Navaratri was LIT," she wrote in the caption.

'I am actually speechless'

Most users on social media were not happy about her use of a morphed image of the Indian Goddess and they slammed her for hurting religious sentiments. Following the social media outrage, Meena Harris deleted her tweet and even blocked several of the users who criticised her. 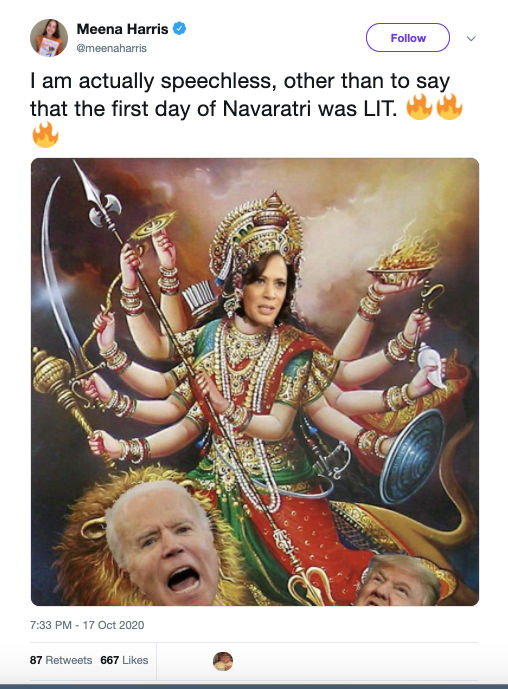 "So much for liberal freedom of expression. The great sister of Kamala Harris uploads an offensive image showing Hindu Goddess Durga as her sister and when we take action he deletes and blocks me. Not unexpected of such odd day Indian & Even Day Black for vote bank," one user tweeted.

Take a look at some other reactions:

So much for liberal freedom of expression. @MeenaHarris

The great sister of @KamalaHarris uploads an offensive image showing Hindu Goddess Durga as her sister and when we take action he deletes and blocks me. Not unexpected of such odd day Indian & Even Day Black for vote bank. pic.twitter.com/yIQiSLc4vy

Kashmiri columnist and political commentator, Sunanda Vashisht said that she is "deeply offended" and said that "our faith is not for you to mock or use for your political point-scoring"

Dear @meenaharris I just came across this image that you tweeted & have now deleted. As a Hindu woman I want to tell you I am deeply offended.Our faith is not for you to mock or use for your political point scoring.Your ignorance about Ma Durga is appalling as is your arrogance pic.twitter.com/ZeqTDT8kLV

Dear @meenaharris and @KamalaHarris if you think you are going to win Hindu votes by mocking us, think again. This image is highly offensive and insulting to Hindus. Our Divinities are NOT cultural curios for you to mock and trivialise. And you delete without an apology? pic.twitter.com/00jijrNRih

Whole life who never acknowledged her roots from India, all of a sudden, she not just became Indian but dared to offend Hindus by morphing herself as Mother Durga...?? Deeply offended. Just deleting the tweet was not enough @meenaharris .. you owe us an apology as well. pic.twitter.com/YVlNA1oEtc

Born to a Jamaican father and an Indian mother, California Senator Kamala Harris, if elected, would be the first woman vice president ever for the country. Kamala's mother, Shyamala Gopalan, was born in Chennai before she moved to the US for further study. Shyamala became a leading cancer researcher and activist. Shyamala was the daughter of PV Gopalan, a high-ranking civil servant.

Earlier, Democratic presidential nominee Joe Biden and his running mate Kamala Harris extended greetings to Hindu community in the US on Navratri and wished for the victory of good over evil once again. Biden, 77, is challenging President Donald Trump, a Republican, who is seeking another term in the November 3 presidential election. In August, they greeted the Hindu community in the US on the occasion of Ganesh Chaturthi.

As the Hindu festival of Navratri begins, Jill and I send our best wishes to all those celebrating in the U.S. and around the world. May good once again triumph over evil — and usher in new beginnings and opportunity for all.

.@DouglasEmhoff and I wish our Hindu American friends and family, and all those celebrating, a very Happy Navratri! May this holiday serve as an inspiration to all of us to lift up our communities and build a more inclusive and just America.

WE RECOMMEND
Outrage over mispronunciation of Kamala Harris’ name, supporters launch online campaign
Kamala Harris returns to campaign trail with Florida stops
Kamala Harris says she would be back on road on Monday
Kamala Harris reveals 3 signs of being Indian-American, says 'everyone is uncle, auntie'
Kamala Harris: Lots of unanswered questions