Acting US Attorney for District of Columbia, Michael Sherwin, ultimately dismissed the claims, ruling that there’s “no direct evidence" at this point of kill.

A top federal prosecutor for the US District of Columbia said that the investigators haven't recovered any "direct evidence" related to any "kill or capture teams" that led the US Capitol insurrection, negating the allegations made by the federal prosecutors in Arizona earlier. In a court filing, Arizona prosecutors had suggested that there was ‘strong evidence’ that the pro-Trump mob invaded the Capitol building with an agenda to ‘assassinate’ the Congress members. In a recent statement on January 16, the attorney for the District of Columbia said that there was a ‘disconnect’ in the ruling of the district courts undertaking preliminary hearings for insurrection from that of the Arizona prosecutor. The remarks come with respect to the court filing against Jacob Chansley, also known as the "QAnon Shaman".

According to US news agency NPR's sources, the subject of the motion had left a threatening note at the Senate dais for lawmakers and the US Vice President Mike Pence. This, however, couldn’t be used as robust evidence against claims of the organized teams that intended to “kill” Congress members or the Democrats,  according to federal prosecutors. The QAnon shaman had called Pence a ‘child-trafficking traitor’, but the prosecutors found no other evidence to back the killing intentions. The far-right conspiracy theory propagators QAnon, a fringe group started a mass movement on Twitter that claimed the threat of a “deep state” against US President Donald Trump. The manipulative conspiracy theory and QAnon-associated content were shared on a large scale, inciting a right-wing conspiracy movement.

Read: US Announces Fresh Sanctions On Iran In Final Days Of Trump To Curb Nuclear Programs 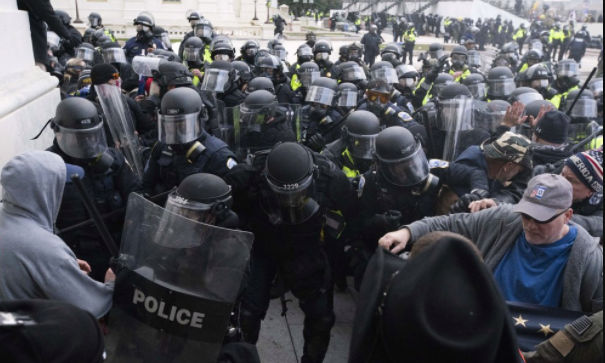 [US Capitol Police push back demonstrators who are trying to enter the U.S. Capitol in Washington. AP Photo/Jose Luis Magana]

No 'kill or capture teams'

A prosecutor mentioned in a memo at a hearing in Chansley, Phoenix that there was, in fact, “strong evidence” that Trump-inspired mob, including Chansley’s own words and actions at the Capitol, supported the intent of the Capitol rioters to assassinate elected officials in the United States Government. However, the allegations on the memo were struck later by the prosecutor, Todd Allison. Allison said in a hearing, that the prosecutors didn’t want to mislead the court, however, suggesting that QAnin shaman remains in jail. Acting US Attorney for the District of Columbia, Michael Sherwin, ultimately dismissed the claims, ruling that there’s “no direct evidence at this point of kill.”

Read: Trump's Presidency Not Just A Blip In US Foreign Policy