Amid the continuous falling popularity of US President Joe Biden and Vice President Kamala Harris, another White House staffer announced to step down. 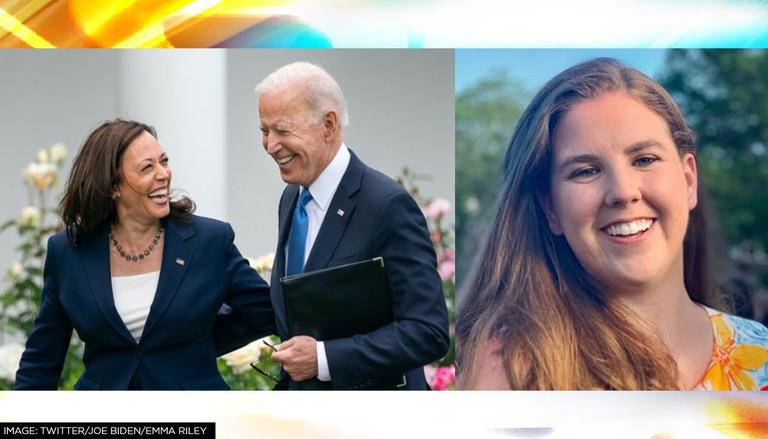 
Amid the continuous falling popularity of US President Joe Biden and Vice President Kamala Harris, another White House staffer announced to step down from her post, reported news agency Sputnik on Saturday. Citing the micro-blogging announcement of the Communications Chief of Staff Emma Riley, the news agency said Riley is quitting her post in the West Wing in order to pursue a career at the Department of Labour.

Notably, the announcement came heels of the East Wing's communications director for the vice president, Ashley Etienne, who recently announced to leave her post in the next month.

Though the Communications Chief of Staff did not specify her plans and her future aspects with the Democrats, her post hinted she would travel across the US with Labour Secretary Marty Walsh. Also, her Twitter post said that she would hold the Department of Labour.

Apart from the announcement, Riley also said she would join Biden's Build Back Better plan. Notably, the Biden administration recently passed a bill for his idea of using post-disaster restoration and recovery as an opportunity to develop a community's physical, social, environmental and economic conditions to build a more resilient community in an effective and efficient way. However, its final cost has still not been estimated by the Congressional Budget Office.

Meanwhile, the media outlets are also perceiving the back to back resignations as the falling rating of the US President and Vice-President. Recently, a survey conducted by Fox News revealed that the popularity of both Biden and Harris has been nosediving ever since both of them assumed power earlier this year.

As per Fox News polls, US President Joe Biden's approval rating dropped to 44% despite lingering at 46% last month. His rating dropped further as he failed to address various issues including immigration, rising COVID-19 infection numbers, the introduction of vaccination mandates, and the chaotic troop withdrawal from Afghanistan.

It is worth mentioning the United States has witnessed several protests after the Taliban ousted the democratic government and took over the war-torn country, leaving lakhs of Afghans in the state of exile. Apart from facing the wrath domestically, the Biden administration has been facing backlash globally.

WE RECOMMEND
US: Donald Trump's photo book 'Our Journey Together' to be launched on December 7
US Congress members write letter to Joe Biden seeking support for Taiwan's Interpol bid
US Defence Secy Austin assures Washington working to evacuate citizens from Afghanistan
US: Biden administration planning to revise Trump-era rules to save greater sage grouse
US succeeds in halting construction of secret Chinese port project in UAE: Reports