US: Nancy Pelosi Says 'no One Is Above Law' As Trump Gets Impeached Twice

Donald Trump’s impeachment on January 13 confirmed that “no one is above the law” US House Speaker Nancy Pelosi said after Republican leader's impeachment.

Donald Trump's impeachment on January 13 confirmed that "no one is above the law" US House Speaker Nancy Pelosi said after the Republican leader became the first American leader to be impeached twice during his tenure. Following a bipartisan vote, the 74-year-old was impeached for "incitement of insurrection". This came after the Democrats accused Trump of inciting violence as his supporters stormed inside US Capitol building violently last week.

"Today in a bipartisan way the House demonstrated that no one is above the law, not even the president of the United States," the top Democrat in Congress said at a ceremony at which she signed the article of impeachment 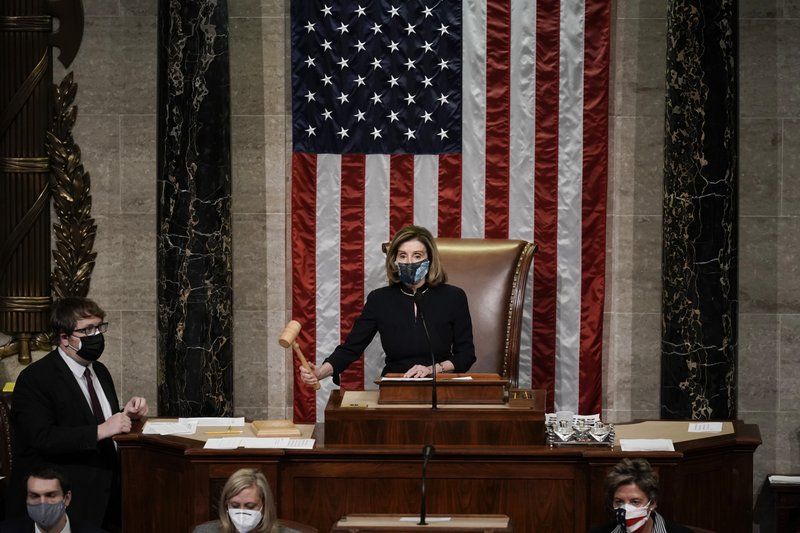 On Wednesday, Pelosi not only caught eyeballs with her blistering speech but also made a statement with her outfit. The top Democrat was spotted wearing the same black outfit and floral mask which she wore during the first impeachment trial of Trump. The only thing missing is what people dubbed as "impeachment outfit" was her brooch.

We know that the President of the United States incited this insurrection – this armed rebellion – against our American democracy. He must go. pic.twitter.com/pIxOv2hOQv

After US House Speaker Nancy Pelosi on January 10 said that she would push ahead on outgoing President Donald Trump's impeachment, Vice President Mike Pence on January 12 addressed a letter to the Speaker. In the letter, Mike Pence said that he will not "yield to pressure" to invoke the 25th Amendment to remove Donald Trump from office. Condemning last week's riots in Washington's Capitol building, the Vice President said that he does not believe that such a course of action is in the best interest of the Nation or consistent with the US Constitution. Subsequently, the US House voted 223-205 to pass a non-binding resolution urging Pence to invoke the 25th amendment, though it is thought to be largely symbolic given that he has already refused.

On January 6 afternoon, thousands of Trump supporters broke barricades outside Capitol Hill and marched into the building, scaling walls using scaffolding and breaking windows to gain entry. Inside, rioters tried to push through doors, fought with police, and generally invaded and defiled the premises. As per reports, at least five people lost their lives including a police officer.

WE RECOMMEND
US House passes non-binding resolution urging VP Pence to remove President Donald Trump
Donald Trump becomes first US President in history to be impeached by House for 2nd time
Nancy Pelosi asks lawmakers to 'return to Washington this week' to impeach Trump
US House Speaker Nancy Pelosi to push ahead Trump's impeachment even if Pence disagrees
Twitter CEO Jack Dorsey reasons ban on Donald Trump; states US President had been warned