The United States Department of Defence has Top Secret classified briefings and a Secret classified video of a potential UFO sighting, the US Navy said in a response to Freedom of Information Act (FOIA) request sent by researcher Christian Lambright. The request was filed by Christian in relation to the infamous 2004 encounter between the USS Nimitz and an unknown aerial object. According to the response, the encounter was nicknamed 'Tic Tac' as the object resembled the sweet, and one of the two pilots of the USS Nimitz, Commander David Fravor spotted the object.

The UFO was first spotted at about 80,000 ft above the sea when fighter planes were diverted to investigate, The object was spotted on radar from another ship - USS Princeton. Footage from the November 14, 2004 incident was revealed to the public in 2017 and 2018.

The three videos made the national news for its extraterrestrial connection. According to international media reports, the Navy said that it considers the phenomenon contained/depicted in those three videos as unidentified.

Credits: To The Stars Academy of Arts & Science/YouTube

ONI/FOI coordinator Camille V'Estres in her reply to Christian Lambright said, "We have discovered certain briefing slides that are classified TOP SECRET. A review of these materials indicates that are currently and appropriate Marked and Classified TOP SECRET under Executive Order 13526, and the Original Classification Authority has determined that the release of these materials would cause exceptionally grave damage to the National Security of the United States." 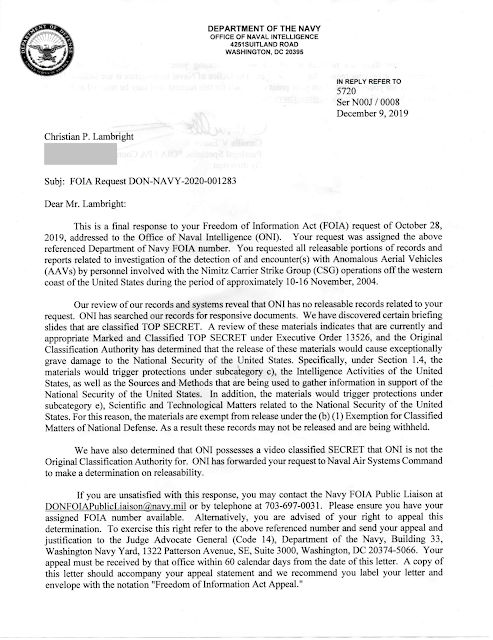 Ever since the growing rumours about the Area 51 Air Force base in the United States have started to spread, people have now become more interested in knowing whether or not aliens exist in this world. Details of the facility's operations are not publicly known, but the USAF says that it is an open training range, where the development and testing of experimental aircrafts and weapons systems take place.