US Slides To Second As WEF Declares Singapore Most Competitive

The 40th Global Competitiveness Index by the World Economic Forum on October 9 declared Singapore as the most competitive country with the United States sliding to the second position. The report released on October 8 stated that US is now less competitive than it was in the previous year as the economy remains unstable admidst the trade war with China. The latest assessment of the factors like productivity and long-term economic growth found Singapore overtaking all other countries. 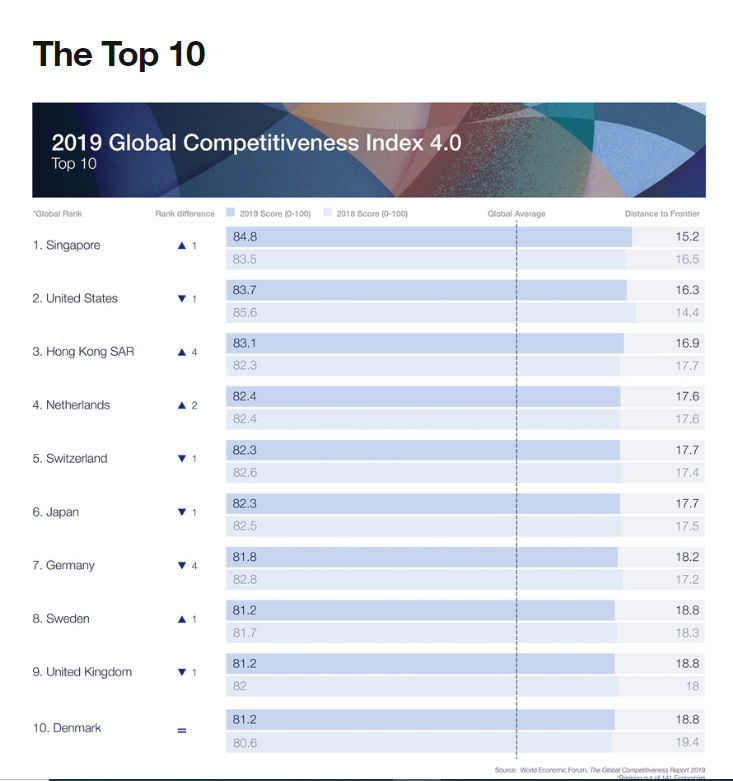 The Forum was also the organizer of the annual gathering of business and political elite groups in Davos. WEF has been releasing the competitiveness index globally since 1979 which analyses the economies that are well structured for productivity and the long-term growth of the country. The US has lost its top position on the basis of its measures on “health life expectancy” and its consciousness for the skills required in the 21st century. Hong Kong, Netherlands, Switzerland are also among the top five most competitive countries in the world. The index maps out the landscape of 141 competitive economies and is also based on nearly a hundred indicators distributed in a dozen categories like health, financial system, market size, business dynamism and their ability to innovate.

The reports surveyed of 13,000 business executives has stressed the “deep uncertainty” and “lower confidence”. However, even after its gap in future skills, the US is still called “an innovation powerhouse” and also the largest and most competitive economy. Presently, the US also ranks highest for the “ease of finding skilled employees”. Klaus Schwab, the founder of WEF reportedly called the report as a compass for motivating the new economies to make innovation their key factor of competitiveness. Moreover, authors have also pointed out that it was too early to entirely assess the effect of some of the operative factors in the global economy in 2018.