Slamming BJP's hate-filled politics, Samajwadi party chief Akhilesh Yadav, on Saturday, stated that Delhites had rejected it as exit polls project AAP retaining Delhi. Hailing the youth voters, he claimed that this was ' new informed India' which voted for those who worked for development, welfare, and peace. Yadav had also hailed Kejriwal for his phenomenal work in Delhi. 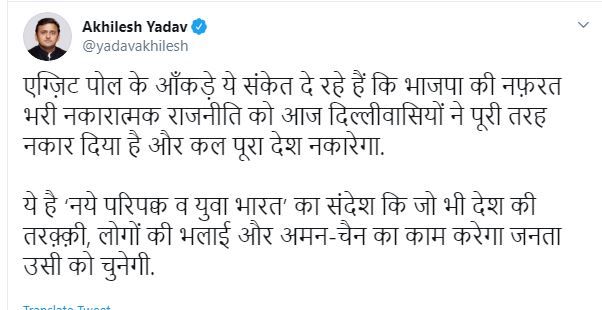 Amid all Election exit polls projecting AAP retaining the 70-seat Delhi Assembly, BJP Delhi Chief Manoj Tiwari stated that all polls will fail on February 11 - result day. Claiming that certain polls predict BJP winning 26 seats, he said that BJP will form government in Delhi with over 48 seats. Moreover, talking to Republic TV, he claimed that BJP will garner 56% of the vote share.