The citizens of Delhi reposed faith in Arvind Kejriwal once again by voting the Aam Aadmi Party to power with an overwhelming majority. Apart from the celebratory scenes enjoyed by the CM-designate and the members of his party, even some of the well-known names joined in sending their wishes to the politician. Prime Minister Narendra Modi too congratulated the AAP leader, while conveying his best wishes to ‘fulfil the aspirations of the people of Delhi.’

Kejriwal also responded by expressing his gratitude to the wish, adding that he was looking forward to working with the government to make the Capital a ‘truly world-class city.’

Thank u so much sir. I look forward to working closely wid Centre to make our capital city into a truly world class city. https://t.co/IACEVA091c

Sonam K Ahuja felt something important was also needed and responded to the post, ‘And pollution-free’ along with a heart emoji.

It is a known fact that Delhi is among the worst-affected cities in terms of pollution. The pollution was so severe late last year that even a cricket match was dragged into a controversy at that time, with the air deemed unbreathable.

Even Sonam had then shared tips on how one could keep themselves safe from it at that time along with a report on the dos and don’ts. 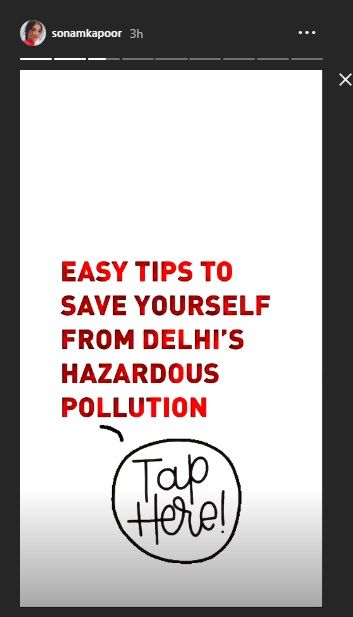 The Kejriwal government has come up with the odd-even scheme, in a bid to reduce the pollution. However, the initiative has received mixed results till now.

Meanwhile, the AAP is set to form the government after bagging 62 seats in the Assembly elections. The party’s landslide victory came at the expense of BJP, who were second-best with 8 seats, while Congress failed to get off the mark.