BJP on Wednesday released its list of 40 star-campaigners for Delhi Assembly polls which include PM Modi, Amit Shah, several CMs and actors-turned politicians

The BJP on Wednesday released its list of 40 star-campaigners for Delhi Assembly polls which include Prime Minister Narendra Modi, Union Home Minister Amit Shah, newly elected party president Jagat Prakash Nadda, several Union Ministers and Chief Ministers of the states ruled by the party. Union Ministers, including Rajnath Singh, Nitin Gadkari, Anurag Thakur, Mukhtar Abbar Naqvi will campaign for the party, which won only 3 seats out of 70 in 2015 polls. 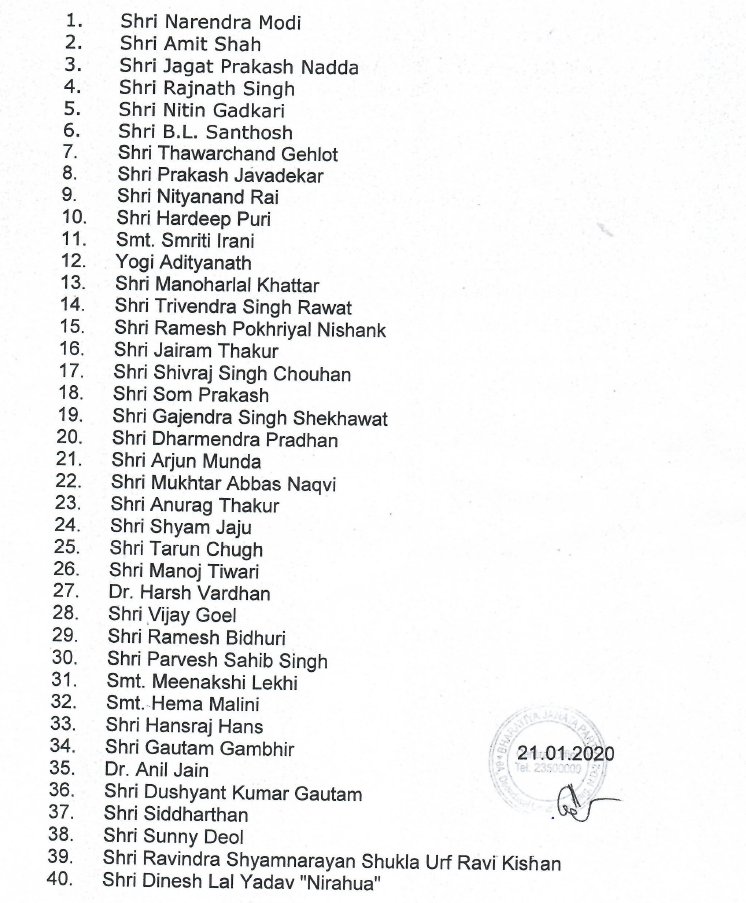 The BJP on Tuesday released its final list that has its New Delhi candidate, Sunil Yadav, who is pitted against Chief Minister Arvind Kejriwal. Another key name in the list of 10 candidates is Tajinder Bagga. After his exclusion from the first list, he was trolled on social media. But on the intervening night of Monday and Tuesday, BJP officially said it is fielding him from Hari Nagar. Though he was pitching for Tilak Nagar, that seat has been given to another candidate. Polling on 70 Assembly seats in the national capital will be held on February 8 and the counting of votes will take place on February 11.

READ | Congress to unleash Navjot Sidhu to take on Kejriwal & BJP in Delhi; campaigners list out

Ahead of the Delhi Assembly Elections, the Congress also released the list of its star campaigners who will be spearheading its poll campaign. The list includes the name of 40 leaders including Congress president Sonia Gandhi, former party chief Rahul Gandhi, General Secretary Priyanka Vadra Gandhi and former PM Manmohan Singh. Congress has also roped in Chief Ministers from the states where it is in power. They are Madhya Pradesh CM Kamal Nath, Punjab CM Captain Amarinder Singh, Chattisgarh CM Bhupesh Baghel and Rajasthan CM Ashok Gehlot. However, one interesting inclusion in the list is the name of Navjot Singh Sidhu.