Delhi Chief Minister & AAP chief Arvind Kejriwal has assets worth Rs 3.4 crore, an increase of Rs 1.3 crore since 2015, according to his election affidavit.

Delhi Chief Minister and AAP national convener Arvind Kejriwal has assets worth Rs 3.4 crore, an increase of Rs 1.3 crore since 2015, according to his election affidavit. He is contesting the elections from the New Delhi seat. Kejriwal's total assets were worth Rs 2.1 crore in 2015. Kejriwal has mentioned that he has Rs 12,000 in hand while his wife has Rs 9,000 in cash.

Kejriwal does not own a car

Interestingly, Kejriwal who has enrolled as a voter in Chandni Chowk and not New Delhi constituency, does not own a vehicle while his wife has a Maruti Baleno worth Rs 6.20 lakh. The affidavit reveals that his wife has also invested in Public Provident Funds and SBI Mutual Funds. 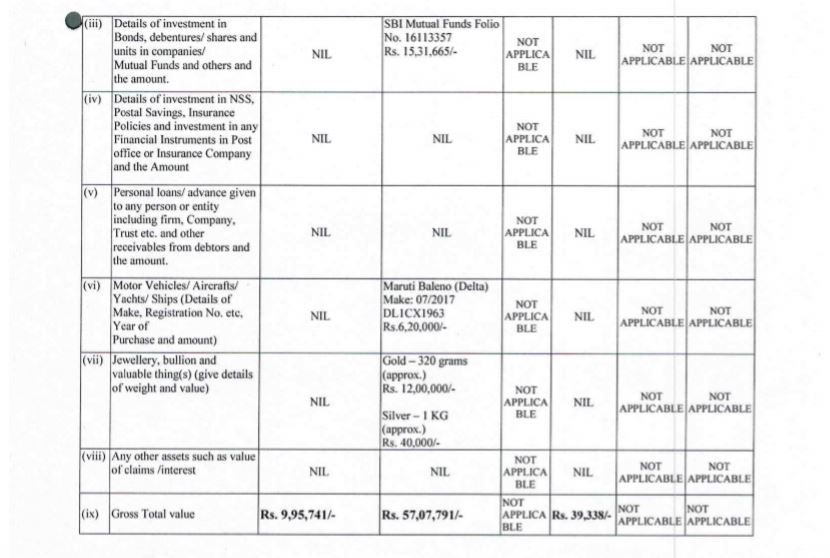 According to details provided by Kejriwal in the latest affidavit to the Election Commission, he declared movable assets like cash and investments at Rs 9.95 lakh while his wife Sunita has a total of Rs 57.07 lakh, including 320 gm of gold worth Rs 12 lakh and 1 kg silver worth Rs 40,000.

Going by Kejriwal’s affidavit, the rise in his assets can primarily be attributed to the increase in the market value of two properties, a flat he purchased in Ghaziabad in 1998 and a property he inherited in Shivani, Haryana. While the Ghaziabad flat is currently valued at Rs 1.4 crore, the Shivani property is worth Rs 37 lakh. The affidavit also mentions that a flat was purchased by Sunita in Gurugram in 2010, the market value of which is now Rs 1 crore.

Kejriwal, a graduate in mechanical engineering from IIT-Kharagpur, has also declared that while he is drawing a salary, Sunita is now on pension.