AAP's Raghav Chadha lashed out at the CM for the broad-daylight smuggling asking if he was getting a cut from the sand mafia for allowing operations. 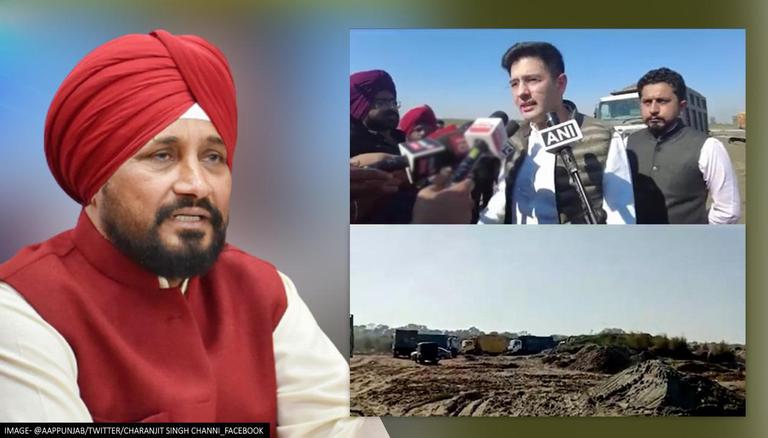 
The Aam Aadmi Party (AAP) launched an 'exposé' in Punjab Chief Minister Charanjit Singh Channi's constituency on Saturday to bust an alleged illegal sand mafia site. AAP Punjab co-Incharge Raghav Chadha conducted a 'live raid' in Channi's constituency Chamkaur Sahib and fired a set of 4 questions to the Congress CM on how the sand mafia was being allowed to operate under his nose.

Standing at the illegal sand mining site in Pind Jindapur, Raghav Chadha said, "In Punjab CM Charanjit Singh Channi's constituency Chamkaur Sahib, there is open illegal sand mining. You can see behind me, sand is being extracted from the water. This is being filled in trucks. When Channi became the CM, he had said I am not the Chief Minister of illegal sand miners. But here we can see how the sand mafia, under the protection of the CM is working."

The AAP leader revealed that as per his estimates, 800-1000 trucks were extracting and smuggling sand on a daily basis in the area. Chadha lashed out at the CM for the broad-daylight smuggling asking if he was getting a cut from the sand mafia for allowing operations. He stated, "I conducted a live raid in his own constituency in pind Jindapur. I have an estimate that 800-1000 trucks are being taken on a daily basis, one truck has 800 feet sand that can be sold from Rs 5- Rs 40. He had put up hoardings all over, but under his nose, sand mafia is operating."

"AAP has a few questions for the CM. For how long is this illegal sand mining happening in your constituency? Second, are you getting a cut from this illegal mining? If yes then how many crores are you getting per month? Third, how many such sites are being operated in his constituency? Fourth, how many such illegal sites are there in Punjab? Lastly, does Channi sahab have a partnership with the sand mafia?" he asked.

In the run-up to the Punjab Assembly Elections 2022, AAP and Congress have traded barbs over a number of issues. From calling Channi 'Nakli Kejriwal' to questioning the state's education model, AAP which is looking to make inroads in the state has left no stone unturned to attack the Congress government. Meanwhile, Congress has slammed AAP's pre-poll sops and freebies and dubbed the CM as a 'Kala Angrez' (black foreigner).

WE RECOMMEND
Punjab polls: AAP vows world-class education for every child; kin of martyrs to get ₹1 cr