Recently, Adah Sharma took to her Instagram handle to share a post, in which a troll made fun of actor Ananya Panday's 'struggle'. See how Adah reacted.

Adah Sharma enjoys a massive fan following on social media, as the actor has a knack for entertaining fans with her wit-infused posts and fun-filled interactive sessions. It seems like Adah Sharma is making the most of her quarantine by connecting with her fans over social media. Recently, the actor recently took a sarcastic jibe at a troll, who made fun of Ananya Panday.

Recently, Adah Sharma took to her Instagram handle to share a picture, in which the actor can be seen describing her moods while taking a break between washing ‘bartans’ and doing ‘jhaadu’. While the well-polished picture earned Adah Sharma immense appreciation from fans, some netizens also trolled the actor.

Adah Sharma, however, gave a befitting reply to a troll, who made fun of actor Ananya Panday and commented: “DUE TO LESS POLLUTION, I CAN CLEARLY SEE ANANYA PANDAY’S STRUGGLE’. Soon after the comment was posted, Adah replied “Kya Dialogue Maare! Seeti Nikal Gaya”. Take a look: 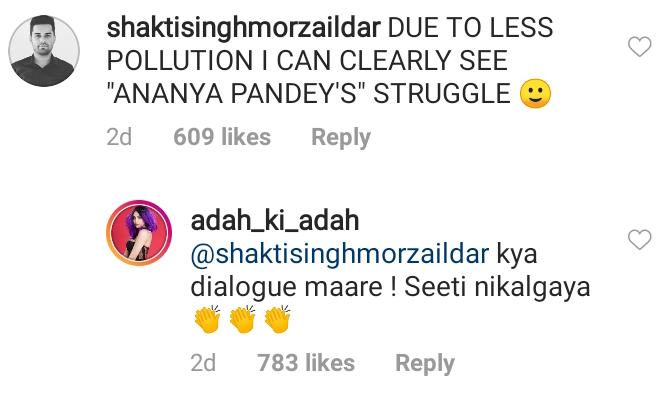 Also Read | Inspiring: Lucknow Doctor Raring To Get Back To Frontlines After Recovery From Coronavirus

Adah Sharma is singing to the tune of success, as the actor has been a part of some interesting releases this year. With her performance in the web-series, The Holiday, the actor garnered immense appreciation from the masses. Adah was also seen along with Prabhu Deva in Charlie Chaplin 2.

Apart from impressing masses of fans, the film received acclaim critically too. Adah was also seen in Commando 3 along with actor Vidyut Jammwal. As per reports, Sharma will be seen sharing screen space with Tara Sutaria and Jackie Shroff in the upcoming crime-thriller, Jhagdaloo, which is an adaptation of a Korean series, Queen of Ambition. She was also seen with actor Neil Nitin Mukesh in the much-acclaimed thriller, Bypass Road.

WE RECOMMEND
1 month ago
Coronavirus-themed car readied in Hyderabad to spread awareness about the outbreak
1 month ago
Inspiring: Lucknow doctor raring to get back to frontlines after recovery from Coronavirus
1 month ago
Ajith Kumar donates Rs 1.25 crore to support nation's fight against Coronavirus pandemic