Twinkle Khanna was recently spotted at the airport with her kids and they left their fans amazed with the sweetest gesture made by Aarav for his sister Nitara. 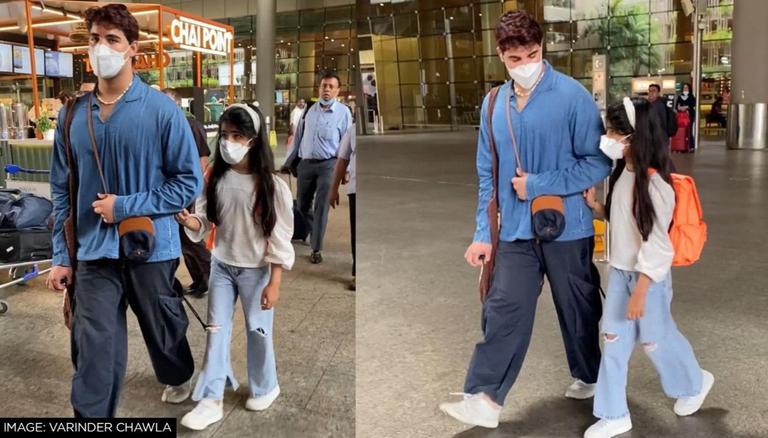 
Akshay Kumar and Twinkle Khanna share a special bond with their kids Aarav and Nitara and often leave fans thrilled by sharing inside glimpses of them with their family. Twinkle Khanna was recently spotted at the airport with her kids and they left their fans amazed with the sweetest gesture made by Aarav for his sister Nitara.

A video clip recently surfaced online in which Twinkle Khanna was seen walking out of the airport with her kids, Aarav and Nitara. In the video, she was seen sporting an olive green top while donning a snazzy pair of yellow sunglasses. On the other hand, her son Aarav was spotted wearing a blue shirt and black pants while holding his sister Nitara’s hand. As the paps and fans were thrilled to greet Twinkle Khanna and her kids, Aarav turned into a protective brother and held Nitara’s hand while walking towards their car.

Earlier on the occasion of Father's Day, Twinkle Khanna shared a cute video of Akshay Kumar and Nitara's tradition of picking some fruits. In the clip, the Raksha Bandhan star could be seen donning a white and red striped night suit as he helped Nitara in collecting some fruits by holding a tree's branches. Sharing the video, the author mentioned how the father-daughter duo does the same every year and revealed that they wait for days to pick the ripe fruits. In the caption, she wrote, "The two of them wait for the Safed Jamun tree in our compound to bear fruit. It is an annual ritual where they stalk the tree for days and pick the right time." She further added, "They have their own games, where they tumble, leap and somersault across the garden as I watch from the sidelines. Mothers can do it all, but some things are just easier left to their dads."