Actress Alia Bhatt who has been working tirelessly for her next Sanjay Leela Bhansali directorial film Gangubai Kathiawadi has taken some time off from work.

Actress Alia Bhatt who has been working tirelessly for her next Sanjay Leela Bhansali directorial film Gangubai Kathiawadi has taken some time off from work while enjoying her getaway with family and friends. The actress is on a vacation in the Maldives with her sister Shaheen Bhatt and friends Akansha and Anushka Ranjan Kapoor. Alia took to Instagram and treated fans with amazing pictures from her trip where she can be seen soaking the sun in a beautiful swimsuit. Sharing the bikini photos, Alia wrote, "Blue seas and a Pisces."

The actress is seen sitting on the beach in a multicoloured swimsuit, splashing water and striking poses for pictures. She even shared pictures with Akansha as the two-step out to party on February 6. The picture showed Alia in a blue and pink top, with funky earrings while Akansha looked glamorous in her blue off-shoulder top with matching accessories. Akansha was the first one to comment under the post and wrote, "Acha acha okay okay". The post also received a comment from her mother Soni Razdan who wrote, “Hello little fishy.” Apart from Alia, Akansha also shared pictures from the shot vacay where she can be seen posing in a mustard swimsuit. She captioned the post as "wave after wave". Ali was the first one to comment with fire emoticons. She even shared a selfie of the two together enjoying some time in the pool and spa. 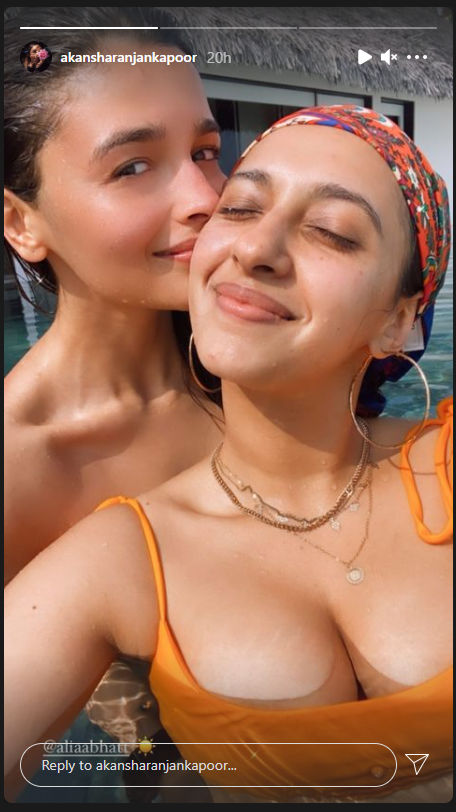 Meanwhile, the actress, who has been stealing the limelight with her marriage rumours with beau Ranbir Kapoor, recently went on a dinner date with someone special. Though not with Ranbir, Alia Bhatt had another close one that she spent her dinner date with. It was none other than her sister Shaheen Bhatt. The duo seems to have gone on a trip together and spent some quality-sister-time together. Shaheen had shared a photo of Alia, dressed beautifully in a red dress on her Instagram stories and captioned the post as 'dinner date'.

On the work front, Alia has been shooting for multiple projects that include Gangubai Kathiawadi. The shooting of the movie is based on the 'madam' of a brothel. Among the other projects in Alia's kitty include the multi-starrer RRR. The movie stars Jr NTR and Ram Charan in lead roles and also features Ajay Devgn, among others. While the first look posters of the leads and teasers were unveiled, there is still a mystery on Alia's look and role, which has been kept under wraps till now. Alia will also be seen for the first time with Ranbir Kapoor, in the movie Brahmastra, which is also likely to release this year.

Read: Alia Bhatt Answers Fans' Assumptions About Being A 'guitarist'; Reveals Her Love For '8'

Read: Alia Bhatt Stuns In Red Dress On 'dinner Date' With Special One But It's Not Ranbir Kapoor