Alia Bhatt and Ranbir Kapoor were seen at Mumbai Airport as they return from their hectic schedule for their upcoming film Brahmastra. See their pics here.

Ranbir Kapoor and Alia Bhatt starrer Brahmastra has been in the news for quite some time now. The  Ayan Mukerji’s directorial is said to be mounted on a massive scale and the shoot has been going on for a few months now. Recently, Ranbir and Alia were seen at Mumbai Airport as they returned from their hectic schedule for Brahmastra. Alia Bhatt sported a light ochre-coloured dress which she paired with brown boots and a purse, on the other hand, Ranbir Kapoor opted for greyish blue long sleeves, ripped jeans, and boots. Ranbir completed the look with a light grey jacket, blue cap and a bag pack. See pictures below. 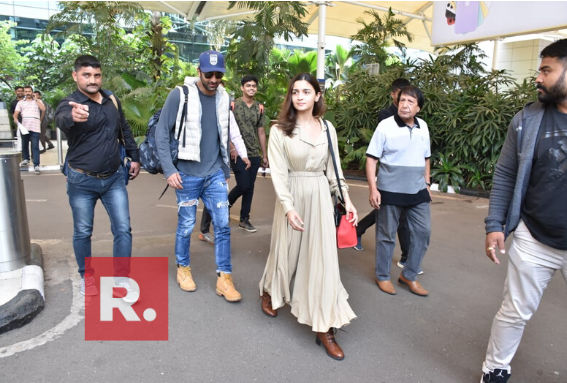 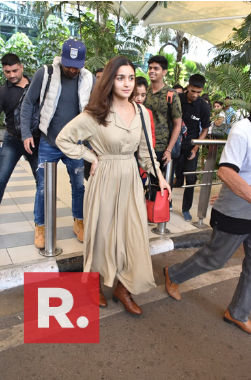 Brahmastra is directed by the Yeh Jawaani Hai Deewani director Ayan Mukerji and has actors Ranbir Kapoor, Alia Bhatt, Nagarjuna, Amitabh Bachchan and Mouni Roy in lead roles. The story of the film revolves around the most powerful weapon of God called Brahmastra, which is broken and hidden in different parts of India. The film is currently in the last leg of its shoot with Ranbir, Alia and Big B filming in Manali for the climax scenes. Bollywood fans have been eagerly looking forward to the release of Brahmastra as it is the real-life couple Ranbir Kapoor and Alia Bhatt's first feature film together.

However, the film has been postponed once again as Brahmastra has been one of the highly anticipated movies of 2020 as it features actors Amitabh Bachchan, Ranbir Kapoor and Alia Bhatt in the lead roles. The film was originally expected to have a Christmas 2019 release which had then been postponed to summer 2020 due to the heavy computer-generated graphics work in the post-production of the movie. According to sources, the release schedule for Brahmastra has been pushed once again as the movie is now expected to hit the theatres in the last quarter of 2020.

Also read | Brahmastra: How Does The Film Have A Connection With Marvel's Avengers?