Reports of Alia Bhatt being injured at the sets of Gangubai Kathiwadi made rounds on social media earlier yesterday after the actress shared a 'health update'.

However, now refuting the claims, the actress in an Instagram post clarified that it was not a 'fresh injury' but an old one that had been acting up for a while. Asserting that there was 'no accident' of sorts, the actress requested the publications to first confirm the series of events before printing lengthy articles on the incident in question. 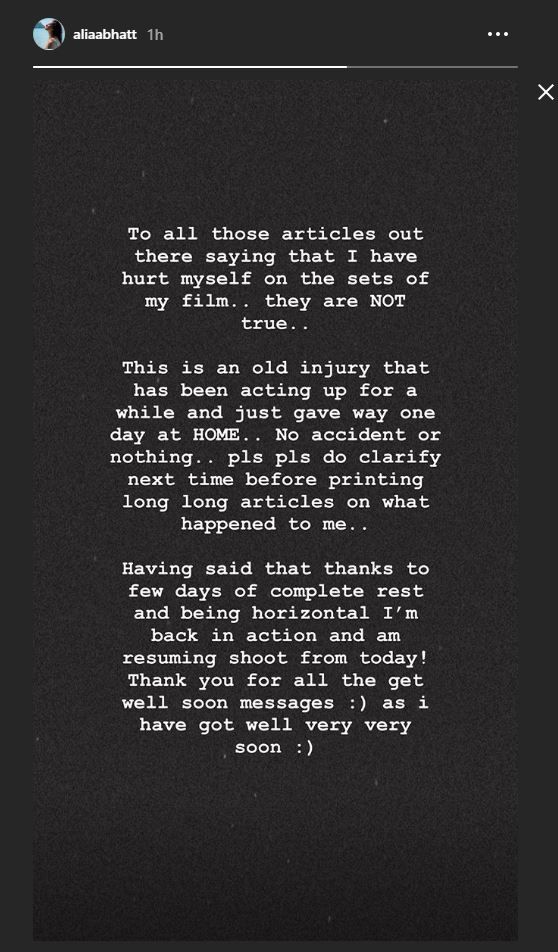 On Monday, Alia had shared a picture of herself and her cat Edward in bed. Alia looked unwell and wrote, “Selfie time with mommy cause she’s hurt her back and has nothing better to do at 2 am.”

While Alia was covered in thick blankets, Edward was focussing on clicking the best selfie. After these pictures went viral, several media claimed that the actress was injured. Setting the record straight, Alia has now put all the rumours to rest.

Reports suggested that the actor was injured on the sets of Gangubai Kathiawadi. The actor received a lot of love and some varied reactions on her social media when she revealed her look for the film. It is a biography directorial by Sanjay Leela Bhansali.

Alia will be seen essaying the dynamic character of Gangubhai, who was a mafia queen back in her days. The film will also star Vijay Razz, suggest reports. The film is slated to release on September 11, 2020.

Alia Bhatt’s first look received a lot of appreciation from fans and critics alike. Proud parents Mahesh Bhatt and Soni Razdan also shared the poster on their Twitter accounts. On receiving king-sized love for her new venture, Alia took to Twitter to thank fans for all the attention. Sharing the first look poster once again, the Brahmastra actor, in the caption, wrote, “Thank you, everyone".

PEOPLE HAVE PLEDGED SO FAR
Don't want to do sensuous roles anymore: Mahie Gill
Ranveer Singh & Devgn to be alongside 'Sooryavanshi' stars at the trailer launch event?
Pankaj Tripathi calls his role in ‘Angrezi Medium’ a "Guru Dakshina" to Irrfan
Salman Khan's aww-dorable pictures and videos with kids will melt your hearts
Kiara Advani's stylish headgears are definitely something to add to your accessories
DO NOT MISS
DELHI VIOLENCE TIMELINE
'DELHI VIOLENCE AN INTEL FAILURE'
IT MIN MEETS MICROSOFT CEO
AADITYA DEMANDS APOLOGY
INSPIRED OR COPIED?
CAT'S REACTION AMUSES TWITTER