Alia Bhatt Reveals That She Is Ill With A Selfie; See Pic

Actor Alia Bhatt recently shared an adorable picture on her social media story, where she revealed that she was down with a cold. Read further to know more.

Everyone has unfortunate sick days, including the biggest actors in the Bollywood film industry. Actor Alia Bhatt recently shared a picture on social media, where she revealed that she was sick. Check out Alia Bhatt's sick day photo below.

Alia Bhatt shares a photo revealing that she is sick, fans wish her a quick recovery 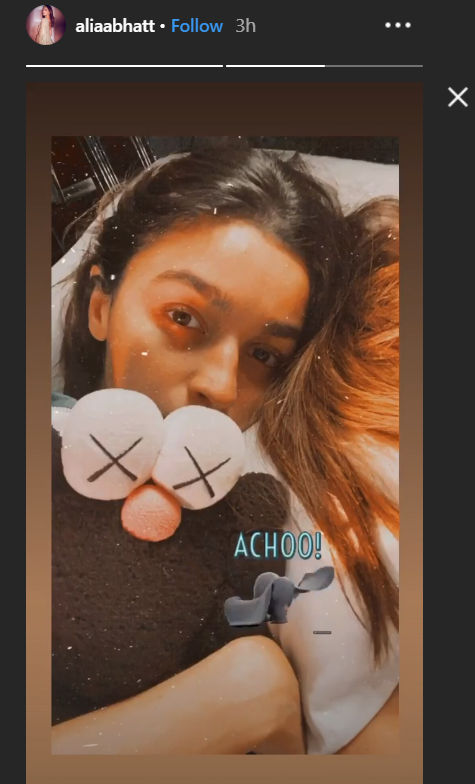 Above is the picture that Alia Bhatt recently shared on her Instagram story. The actor tagged the photo by writing, "Achoo!" Implying that she was down with a cold. In the picture, Alia is lying down on her bed, and looks weak and tired due to her illness. She also has a brown soft toy held in front of her and added a sneezing emoji into her Instagram story. Many of her fans worried over her ill health and wished her a speedy recovery.

Meanwhile, on the work front, Alia Bhatt is set to feature in several films in 2020. She will next be seen in Sadak 2, which is set to release on July 10, 2020. The drama film is directed by Mahesh Bhatt and is a sequel to the 1991 film of the same name. The film also marks Mahesh Bhatt's return to directing films after 20 years. Alongside Alia Bhatt, Sadak 2 will also star popular actors such as Sanjay Dutt, Aditya Roy Kapur, Pooja Bhatt, and Gulshan Grover.

After Sadak 2, Alia Bhatt will also be seen in Gangubai Kathiawadi, Brahmastra and RRR. Gangubai Kathiawadi will be a biographical crime film, based on the life of the titular character, who was a madam of a large brothel in Mumbai during the 1960s. The film is set to release on September 11, 2020.

After that, Alia Bhatt will feature in Brahmastra, a fantasy superhero film that is directed by Ayan Mukerji. Alia will star alongside Amitabh Bachchan and Ranbir Kapoor in the film, which is set to release on December 4, 2020.