Amitabh Bachchan's latest post had his fans asking if he is posing with Carry Minati as they mistook his grandson Agastya Nanda for the Youtuber. Read on.

Also Read: Amitabh Bachchan Shares Words Of Wisdom Amid Lockdown, Urges Fans To Not Give Up

It may sure sound bizarre but one cannot unsee the uncanny resemblance between Amitabh Bachchan's grandson Agastya Nanda and Carry Minati in the picture. Talking about the lovely monochrome picture, Amitabh Bachchan can be seen in an energetic manner as he poses for a selfie with Agastya Nanda with a dumbbell on one hand.

Agastya can also be seen all smiles as he poses with a dumbbell on the other hand. However, his fans could not stop asking Amitabh Bachchan whether it was Carry Minati standing beside him. Take a look at Amitabh Bachchan's post.

Also Read: Can Tom Hanks Fill Amitabh Bachchan's Shoes If 'Sooryavansham' Was Made In Hollywood?

Finally Amitabh Bachchan replied to a fan who had also got confused between his grandson and Carry Minati, asking him of the same in the post. To this, the Paa actor had the most hilarious reply. The megastar replied to the fan by saying, 'baju mein mera pota, mera grandson khada hai. Ye carry kya hota hai. (sic)' His answer left all the other fans in splits but at the same time cleared the confusion which was much-needed. Take a look at the Satte Pe Satta actor's reply. 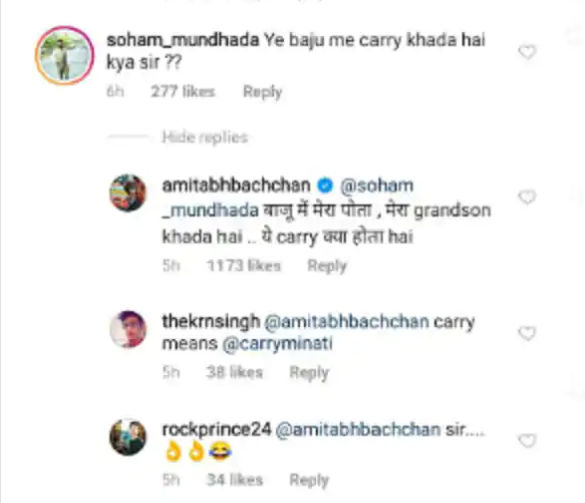 For the unversed, Carry Minati is a popular YouTuber who is well-known for his roast videos on various celebrities or reality shows. Carry Minati made headlines recently when he put up a roast video on Tik Toker Amir Siddiqui. However, Youtube reportedly took down his video which led to a huge backlash against YouTube as well as the Tik Tok community from his fans. Many of the other popular YouTubers like Bhuvan Bam and Ashish Chanchlani also came out in support of Carry Minati aka Ajey Nager.