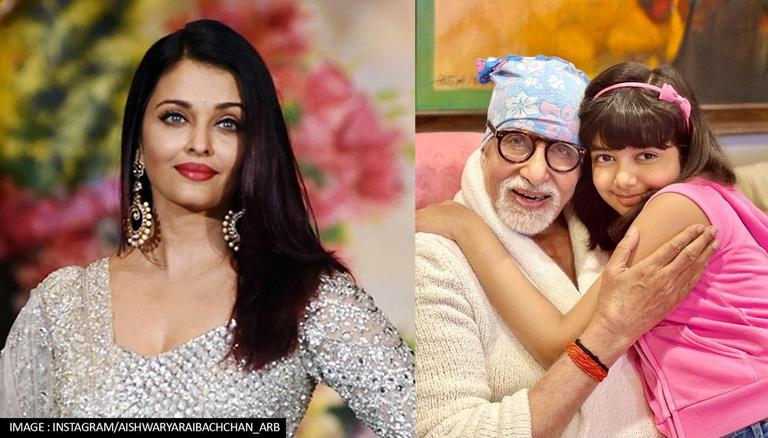 
Megastar Amitabh Bachchan who celebrated his 79th birthday on Monday, October 11, received beautiful birthday wish from his daughter-in-law Aishwarya Rai. The ravishing beauty took to Instagram and shared a picture of the legendary actor along with his granddaughter Aaradhya. The wishes tuned more special as it was penned by his daughter-in-law Aishwarya and granddaughter Aardhya.

"Happy happy birthday dearest darling Dadaji-Pa. Love you forever and beyond," read Aishwarya and Aaradhya's message to Amitabh Bachchan. The iconic actor also received birthday wishes from his son-actor Abhishek Bachchan who shared a video compiling all the amazing pictures of the actor from his initial career days in Bollywood. While captioning the post, he wrote, “My hero, my idol, my friend, my father! Happy birthday, Dad. Love you (sic).”

Amitabh Bachchan on the other hand was overwhelmed and full of gratitude to receive wishes pouring in from all across on his birthday. He took to his social media handle and shared a picture that seemed to be from his visit to a temple. “My gratitude for the love you give me. I shall never be able to repay it. Nor shall I ever be able to fathom your affection. Your greetings today have been immense. I cannot respond to all of them, but I do hold them close here and wish that you take this humble presence here on Instagram as my response,” he wrote while thanking all for their heartfelt wishes.

Meanwhile, after a long time, the actor stepped out of his house and greeted fans and well-wishers who had gathered in large outside his Mumbai house 'Jalsa'. The actor following his tradition waved at his fans and thanked them for coming all the way and wishing him on the special day. Several videos and pictures of the actor greeting fans had gone viral on social media. On the professional front, the actor will next be seen in Ayan Mukerji's directorial Brahmastra. He also has a sports drama, Jhund, directed by Nagraj Manjule, Vikas Bahl's Goodbye alongside Rashmika Mandanna, as well as Oonchai and Nag Ashwin’s untitled film in his pipeline. He will be reuniting with Deepika Padukone for a remake of the Hollywood film The Intern. He will also be seen in MayDay alongside Ajay Devgn which is directed and produced by the Singham actor. Amitabh Bachchan is currently back to hosting Kaun Banega Crorepati on television.

WE RECOMMEND
On Amitabh Bachchan's 79th b'day, Navya Naveli Nanda wishes her 'Nana' with throwback pics
Amitabh Bachchan shares dilemma behind an endorsement deal; says 'blame would come on me'
KBC: When Abhishek Bachchan put Amitabh Bachchan in the hot seat; Watch
Aishwarya Rai grabs eyeballs at a social event in Dubai; check out her pics
Amitabh Bachchan and Rajat Kapoor to record voiceovers for upcoming serial 'Vidrohi'?
Listen to the latest songs, only on JioSaavn.com