Sharing a post on social media, Sonam Kapoor informed that she had the scariest experience with a taxi service. Anand Ahuja now too has tweeted about the same.

Sharing an alarming post on social media, Sonam Kapoor informed that she had the 'scariest experience' with a popular taxi service. Asserting that 'the best and safest' is to use local public transportation or cabs, she emphasized that she was 'completely shaken' by the experience, however, she refrained from divulging in further details. Now resharing Sonam Kapoor's post, the actress' husband pointing out alternatives stated that in London, one should 'walk, cycle, take a train or a black cab' as the taxi service is 'straight-up scary and unreliable' in the area. 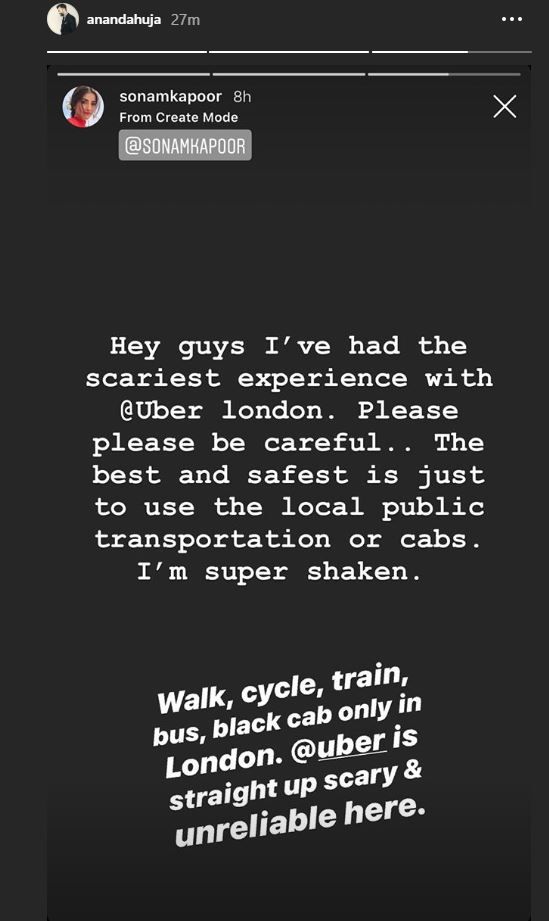 After the duo hit out similar posts, several concerned fans and netizens asked for details and also asked them to contact the police abroad if necessary.

What happened, sonam? As someone who takes cabs in London, it would be good to know!

Goodness! Black cab all the way.

@Uber_Support
Uber should introduce panic button inside their App , which should alert Uber and Cops.... Come On Uber, lots of tech around.. make rides more safer pls.. We trust you!

Just a week back, Sonam Kapoor had bashed an International airline for losing her luggage for the second time in a month. Expressing her frustration and disappointment, Sonam wrote that she has learned her lesson and will never fly again with the airline. The airline immediately responded to her tweet apologizing and asked her if she has been provided with a tracking reference at the airport.

We're sorry to hear about the delay to your luggage, Sonam. Have you been provided with a tracking reference when informed at the airport? Cody

READ:  Sonam Kapoor Praises An International Airline After Bashing One, Calls It 'memorable'