Ananya Panday is one of the most popular youth stars in Bollywood. The actor shared her on the sets go-to beauty hack that one can take inspiration from.

Ananya Panday has been making headlines ever since she made her Bollywood debut with Karan Johar's Student of the Year 2 alongside Tiger Shroff and Tara Sutaria. After a successful debut, Ananya was later featured in romantic-comedy film Pati Patni Aur Woh and is starting to emerge as one of the top actresses in the Hindi film industry. The movie helped Panday garner a loyal fanbase among movie-goers.

Bollywood's budding actor Ananya never leaves any opportunity to pamper herself. While at home with her sister on Saturday night or on the sets, the actor in her spare time, is often seen trying off some do-it-yourself beauty hacks.

She recently took to her Instagram handle to share a boomerang video of herself where she is seen making fun and cute expression by sticking her tongue out. She also gave the video a caption.

She wrote in the caption of the video, ‘Just some ground coffee + coconut oil = best face scrub EVER OnSetBeautyHacks’.

Check out the picture here: 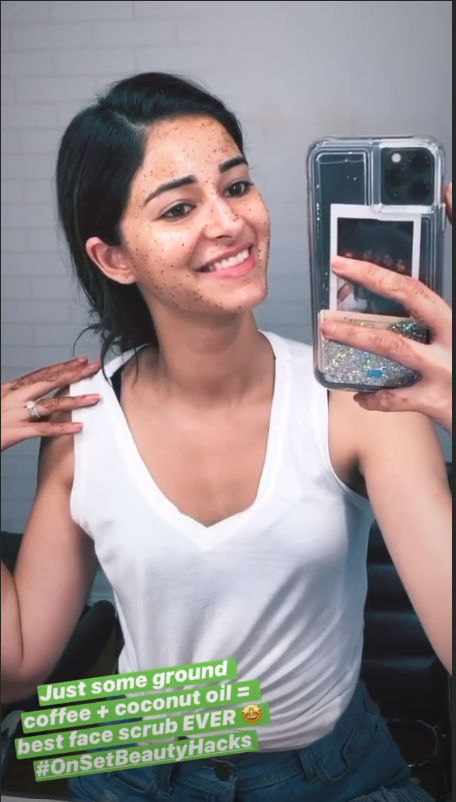 The actor is very well-known among her fans for sharing some amazing makeup, skincare and beauty hacks. She keeps sharing a glimpse of her fitness and skincare routine with her fans via her social media handle.

Ananya has a massive fan following on her social media handle for her unique sense of style and beauty tips. In an interview with a leading entertainment portal, the young actor shared that her millennial patience level is zero and her beauty mantra is basic is beautiful.

On the professional front, the actor is currently busy shooting for her next movie Kaali Peeli. She will share the screen space with Ishaan Khatter. The first look from the movie was released recently, and it received immense love from the audiences.

Apart from this, the actor will also share the silver screen with the Bollywood diva Deepika Padukone in her untitled next. The movie is reportedly known to feature Siddhant Chaturvedi in the prominent role.