Ahead of Valentine's Day, Anil Kapoor expressed his affection towards his 'forever crush' who apparently makes him blush every time she replies to his text.

Anil Kapoor is known for his versatility as an actor as well as for his youthful looks in the Hindi film industry. The veteran actor is pretty much at pace with the social media game and always shares updates about his professional as well as his personal life. The 63-year-old actor seldom shows his romantic lover boy side on social media but earlier on Sunday, with Valentine's Day approaching in the coming week, he has made an exception.

The Bollywood actor shared a post with a clip from his 2007 film Welcome where he played the character of the adorable gangster Majnu bhai. When he fell in love, Majnu bhai blushed coyly and that is exactly what happens to Anil Kapoor when his 'forever crush' replies to his text messages. Take a look at the Instagram story update to see who the lucky person is. 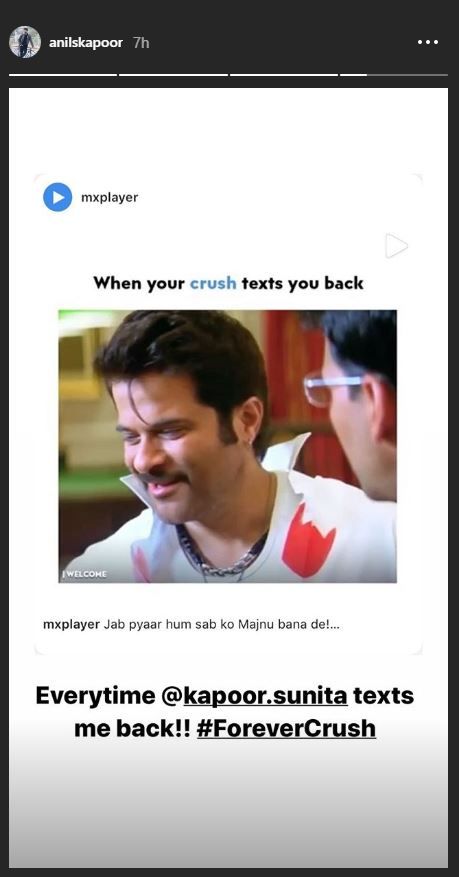 Anil Kapoor's 'forever crush' is none other than his wife Sunita Kapoor who apparently makes him go red in his cheeks like Majnu bhai every time she replies to his texts. The couple has a great love story and make a striking appearance when clicked by the paparazzi. Anil Kapoor and Sunita Kapoor were last seen together along with their daughter actor Sonam Kapoor at Bollywood actor Armaan Jain's wedding festivities earlier last week.

What's next for Anil Kapoor?

The Bollywood veteran who has been in the industry for about 40 years now was last seen in Mohit Suri's last film Malang along with an ensemble cast of actors Aditya Roy Kapur, Disha Patani and Kunal Kemmu. The film released in theaters on Friday, February 7. The actor is scheduled to feature in Karan johar's magnum opus Takht which will release in 2021. Anil Kapoor will reportedly be essaying the role of Mughal Emperor Shah Jahan in the film.