Evergreen Anil Kapoor Has THESE Fitness Goals For His 'next Janam'

Anil Kapoor who is known as one of the evergreen actors of Bollywood has revealed his fitness goals for his 'next Janam'. Continue reading to know more.

Anil Kapoor who is known to be one of the fittest Bollywood actors. Even at the age of 63, he maintains his physique very well. The actor also has shared plans for his 'next janam'. The actor has always given importance to his fitness.

Earlier, Anil Kapoor in the past in an interview with a media publication also said that he feels cranky if he does not work out. Anil Kapoor has maintained his physique being a 63-year-old. He also said that for him, fitness is a way of life and it is his daily routine.

Recently, Anil Kapoor's comment on Farhan Akhtar's Instagram post has grabbed everyone's attention. Farhan Akhtar posted a reverse video from his Maldives vacation. Actor Anil Kapoor reacted to this video saying "Flash-forward, I want to do this next Janam and have a body like this". To this comment, many fans replied saying that they wanted a body like Anil Kapoor.

Also Read: Disha Patani Shares Her Experience Of Working With Salman Khan For The Second Time

Here is a look at the comment posted by Anil Kapoor 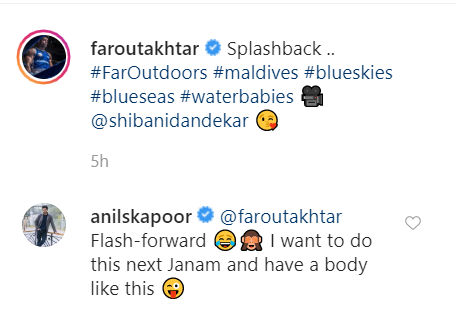 Watch the video below

Anil Kapoor revealed his fitness routine to the media publication. He said that he likes to do yoga, running, sprinting, and he also likes lifting weights. The actor also mentioned that he does planks.

Anil Kapoor also added that he cannot go to work without exercising out as it gives him the positivity that is needed. The actor believes that he can perform better when he is feeling fit.

Anil Kapoor will be next seen in Mohit Suri's upcoming film Malang. He will share screen space with Aditya Roy Kapur and Disha Patani and also Kunal Kemmu. The film is produced under the banner of T-Series and Northern Lights Entertainment. Malang is scheduled to hit the screens on February 7 this year.

Also Read: Sara Ali Khan Reveals THIS Is The One Common Quality That All Of Her Co-actors Have