Anil Kapoor took to his Instagram handle and uploaded a string of throwback pictures with daughters Rhea and Sonam Kapoor as he misses the sibling duo. 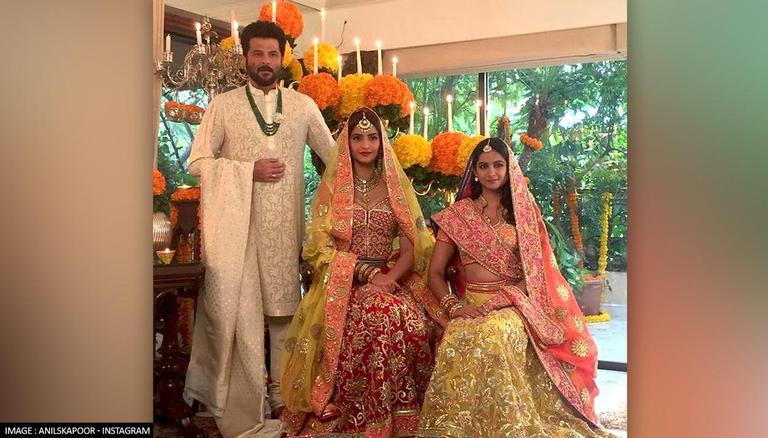 
Anil Kapoor has been missing his daughters Sonam Kapoor and Rhea Kapoor a 'little extra' lately, and his latest Instagram post is a testament to it. The actor dug out pictures from the archives, which showcased the sibling duo in their early childhood as well as the father-daughter trio posing in a recent family gathering. The 64-year-old superstar also noted that he thinks about his daughters 'every day'.

Taking to his Instagram handle on Sunday, November 7, the superstar shared a series of photos, beginning with the one where Sonam and Rhea can be seen feeding cake to each other. The last picture shows the trio dressed in regal ethnic attire as they strike a pose. For the caption, he wrote, "I miss you both every day but maybe just a little extra today!! @sonamkapoor @rheakapoor." Take a look.

READ | Anil Kapoor wishes son-in-law Karan Boolani on his b'day; 'You’ve always been like my son'

Sonam Kapoor moved out of her paternal home after her marriage to Anand Ahuja in 2018. The duo spends most of their time in London, however, Sonam keeps visiting the country for work and other chores. On the other hand, Rhea Kapoor also married Karan in August this year, leaving her original residence in Mumbai.

Anil Kapoor's Instagram is filled with pictures of his immediate family members, and he recently clocked son in law Karan Boolani's birthday by uploading the latter's candid click. "Happy Birthday @karanboolani! You’ve always been like my son and a part of the family but I’m so glad this year it’s official! May you keep succeeding & inspiring us all every day!", he wrote.

On the work front, the actor will soon be seen in Jugg Jugg Jeeyo alongside Varun Dhawan, Kiara Advani and Neetu Kapoor. The Raj Mehta directorial also stars Prajakta Kohli and Maniesh Paul in pivotal roles. According to recent reports, Anil Kapoor will soon join hands with Aditya Roy Kapur once again for the duo's next film. The two will reportedly star in the Indian adaptation of The Night Manager.