Anil Kapoor recently shared a lovely picture along with his wife as they celebrated a milestone in their lives. Read here to know what it is about.

Anil Kapoor is among Bollywood's most acclaimed actors. The award-winning actor has also been quite active on social media. He is also often seen sharing adorable posts with his wife Sunita Kapoor as they share a very close bond. Anil Kapoor recently shared a lovely post on his social media handle along with his wife as they celebrate a milestone in their lives.

Anil Kapoor took to Instagram to share a picture along with a voice note as he went on to reveal that today was the day when he proposed his wife, Sunita Kapoor. In the picture, Anil Kapoor can be seen standing behind his wife as he wraps his arms around her neck. The duo goes on to give a striking pose as they are all smiles in the picture.

Along with the picture, he also went on to write, “On the night of 17th May, I signed an important film which was a big step in my career, and on 18th May I took an even bigger step… I proposed to my girlfriend Sunita and asked her to be my wife…”. He further added saying,” People celebrate anniversaries, we celebrate the proposals as well! And we never let ourselves forget how fortunate we are to have so much to be grateful for”. He also went on to keep his fans ready as he also wrote, “Watch out for our wedding story tomorrow.” Check out the post below.

Fans were all excited and happy seeing this post. Fans went on praising the duo and their love story. The duo has always been giving fans couple goals as they share some lovable pictures online. Some of the fans wrote, “Amazing,” “This is beautiful,” “My heart,” “This is the cutest love story ever,” and many more. Check out a few more comments below. 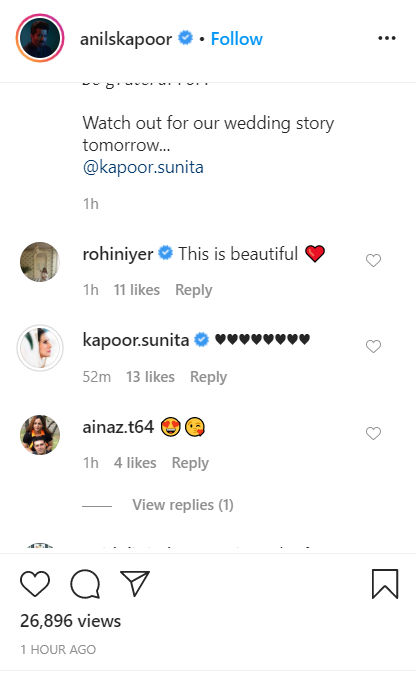 Anil Kapoor 's love for wife Sunita Kapoor has also been highlighted on social media. Images of the actor are enjoyed by millions of fans. Kapoor hasn't backed up from sharing his sweet moments with his partner, Sunita Kapoor, from their wedding pictures to happier moments. Here are some adorable pictures of the duo.

PEOPLE HAVE PLEDGED SO FAR
LATEST NEWS
View all
22 mins ago
Akshay kumar, virat kohli unite for video tribute to frontline workers: 'you are real heroes'
1 hour ago
Kareena kapoor khan or jennifer lopez: who aced the silver mirror work outfit like a diva?
1 hour ago
Inaaya naumi kemmu wishes kunal kemmu, writes "best papa ever hands down"
1 hour ago
Kriti sanon's 'raabta' and other movies that did not perform well at the box office
17 mins ago
Deepika padukone asks ranveer to 'make eggs' on live chat; sunil chhetri left in splits