An old photo of Ankita Lokhande, former girlfriend of Sushant Singh Rajput has been doing the rounds on social media. Read on to see the pic.

Sushant Singh Rajput’s untimely death left his fans and film fraternity devastated. His fans have been digging up the late actor’s photographs from the past as they are still mourning over his loss. A fan page dedicated to the late actor and his former girlfriend uploaded a picture which has been going viral on social media.

Sushant Singh Rajput used to be in a relationship with his co-star Ankita Lokhannde. An old photograph of Ankita has been doing the rounds, where in the background, one can see a wall filled with Sushant and Ankita’s photos together. While in the picture Ankita and her mother are all smiles for the camera, fans could not help noticing pictures of Ankita with Sushant in the old photograph. Check out the picture below.

As more and more fans stumbled upon the picture, they started commenting and sharing the picture. Many users wished that Ankita and Sushant were still together. Several other fans missed Sushant and called Ankita his true love. Check out the comments below. 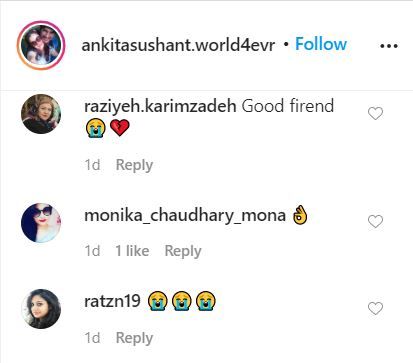 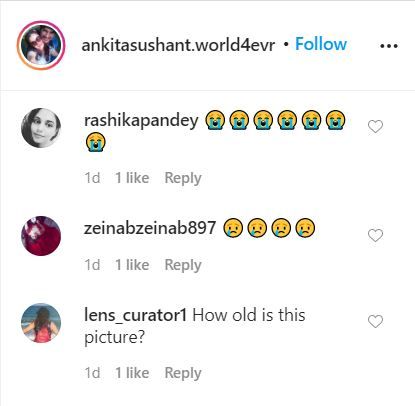 The actor was 34 years of age and was from Patna, Bihar. The actor has been featured in many movies in the Bollywood industry. Sushant Singh Rajput began his acting career from a television drama series, Kis Desh Mein Hai Meraa Dil. After that, he was seen in a couple of reality shows and later he was the male lead in Balaji telefilms’ Pavitra Rishta.

Post Pavitra Rishta, he went to make his Bollywood debut with the film, Kai Po Che! The film was a success and he won the award for the Best Male Debut that year for the film. In this movie, he had shared the screen with Rajkummar Rao and Amit Sadh. Sushant Singh Rajput is remembered for numerous films like Shuddh Desi Romance, PK, Detective Byomkesh Bakshi, and M.S. Dhoni: The Untold Story among several others. He was last seen in theatres in Chhichore, a multicast film, in which Sushant was the male lead.

Sushant Singh Rajput was also seen in Drive, which was released directly on Netflix. Sushant shared the screen with Jacqueline Fernandez in this movie. The movie released in the year 2019 and received mixed reviews. According to a media portal, the actor had an upcoming film release, Dil Bechara. The movie is based on John Green’s novel, The Fault In Our Stars. Sushant Singh Rajput was cast opposite Sanjana Sanghi in this film.