Anupam Kher Shares A Glimpse From 'Uunchai' Shoot, Reveals He Is A Nervous Flyer

Anupam Kher recently revealed he is a nervous flyer moments before getting on a helicopter for his film's next schedule. He is shooting for 'Uunchai' in Nepal. 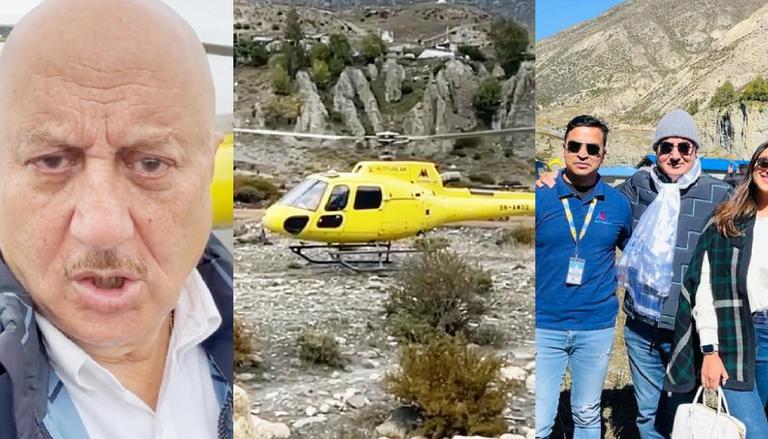 
Anupam Kher is currently exploring Nepal along with shooting for his upcoming film Uunchai. The actor is also keeping his social media followers updated about his whereabouts in Nepal. He recently revealed he is a nervous flyer moments before getting on a helicopter for his film's next schedule.

Anupam Kher recently took to Instagram and shared some videos and photos from Tribhuvan International Airport, Kathmandu. The actor was surrounded by helicopters when he shared he is off to Manang, a town in Nepal, for Uunchai's next shoot. He also shared a helicopter ride in cold weather made him a little nervous.

Kher shared a photo with Uunchai's team, featuring Parineeti Chopra and Boman Irani. Sharing the post, he hailed pilots of the entire world for doing a difficult job. He wrote, "I am a nervous flyer. So I have extra respect for all the pilots in the world. No matter what aircraft they fly. But in the last one month I have traveled to the most difficult locations for @uunchaithemovie in helicopters. My admiration for my pilots, specially for @captbibekkhadka and @andyinstagm has doubled. It is really amazing how they fly in these tough situations!"

Anupam Kher has been overcoming his fears during his shoot in Nepal for Uunchai. Earlier this week, the New Amsterdam actor shared a video of him crossing a rope bridge in Nepal. Sharing the video, Anupam Kher mentioned he never thought he would be able to overcome his fear but he did. He wrote, "Thinking will not overcome fear but action will. Never thought I will get on to one of those rope bridges over a river between two mountains and actually cross it. But I Did! Jai Ho!"

Uunchai marks Anupam Kher's 520th film. The actor announced the movie on October 4 by sharing a photo of director Sooraj Barjatya. He wrote, "The journey of my 520th film #Uunchai begins. Sooraj Barjatya was an assistant to Mahesh Bhatt in my 1st film Saaransh. This is my fourth film with this cinema genius. Working with @rajshrifilms is a bliss and a blessing! I really had to coax camera shy Sooraj for this pic. Thank you! Please bless." Soon after the actor went to Nepal for the film's shoot. Uunchai also casts Boman Irani, Parineeti Chopra and Amitabh Bachchan.

READ | Anupam Kher enjoys the ups and downs of tough terrains while trekking in Nepal; Watch