As Irrfan Khan passed away on April 29, Anushka Sharma shared some wise words by the star. She offered her condolences while remembering the actor.

The untimely death of Irrfan Khan at the age of 53, has shaken the entire film industry. Irrfan Khan was one of the legendary actors of Bollywood. The actor has broken many stereotypes and kept moving forward to not just make his name in Bollywood but also across the globe. Mourning over the loss of such great actor, Bollywood actress Anushka Sharma shared a picture of the star on Instagram.

Anushka Sharma took to her Instagram page and paid tribute to one of the finest actors of the entertainment industry. The actress shared a happy picture of the star captioned it “RIP Irrfan Khan Sir.” In the second monochrome picture, the PK actress shared some wise words once spoken by the legendary actor. Irrfan had announced in 2018 that he was suffering from neuroendocrine tumors, a type of cancer. He was under treatment in the UK before his return to India last year. 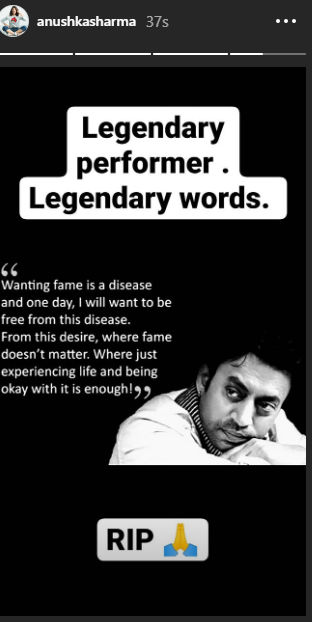 The caption read, “Wanting fame is a disease, and one day, I will want to be free from this disease. From this desire where fame does not matter. Where just experiencing life and being okay with it is enough.” Apart from the actress, her husband and Indian cricket team captain Virat Kohli on April 29 shared his condolence over the untimely demise of Bollywood Actor Irrfan Khan and said, "May God give peace to his soul." Praising the actor, Kohli said what a "phenomenal talent" and "dearly touched everyone's heart with his versatility." Irrfan Khan passed away on April 29 in Mumbai's Kokilaben Dhirubhai Ambani Hospital, where he was being treated for a colon infection. The actor in 2018 had announced that he’d been diagnosed with a neuroendocrine tumor.

His spokesperson announced the news with a statement:

“I trust, I have surrendered”; These were the some of the many words that Irrfan expressed in a heartfelt note he wrote in 2018 opening up about his fight with cancer. And a man of few words and an actor of silent expressions with his deep eyes and his memorable actions on screen. It’s saddening that this day, we have to bring forward the news of him passing away. Irrfan was a strong soul, someone who fought till the very end and always inspired everyone who came close to him. After having been struck by lightning in 2018 with the news of rare cancer, he took life soon after as it came and he fought the many battles that came with it. Surrounded by his love, his family for whom he most cared about, he left for heavenly abode, leaving behind truly a legacy of his own. We all pray and hope that he is at peace. And to resonate and part with his words he had said, “As if I was tasting life for the first time, the magical side of it”.

Read: Irrfan Khan's Dialogues From 'Piku' That Made Fans Fall In Love With His 'lovable Self'