Anushka Sharma Shares 'morning Gyaan'; Tells Fans To Do THIS With Their Hands

Anushka Sharma is known to express her opinion on various issues. She is also quite popular on social media. Here is something she shared with her fans.

Anushka Sharma is widely known for being outspoken and bold in expressing her opinions on public platforms. She started her career in the Bollywood industry with her debut film, Rab Ne Bana Di Jodi opposite Shah Rukh Khan. The actor has a huge fan following on her social media accounts and she keeps her fans updated with her life. Anushka Sharma recently took to her Instagram account and shared some wisdom with her fans. Check out the picture and post below to see what Anushka Sharma shared on her Instagram story. 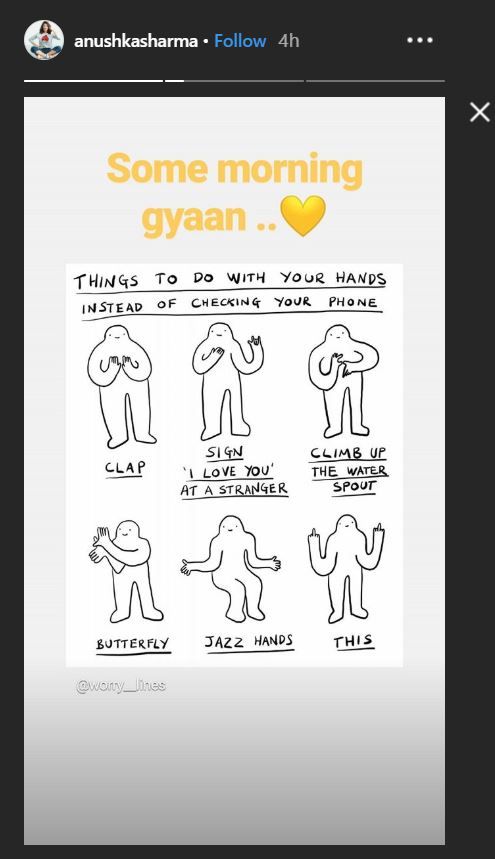 Taking a dig at people who spend too much time on their phones, Anushka Sharma shared a cartoon image telling her fans what else they can do with their hands. She shared a post by another page and captioned it “Some morning gyaan”. The image showed a cartoon figure doing a lot of things from his hands other than holding a phone in his hands. The figure is seen making various gestures and signs with his hands including clapping, making jazz hands, signalling ‘I love you’ in sign language and many more.

This hilarious post that was shared by her belongs to another Instagram handle, @worry_lines who is a fairly popular page on Instagram for its illustrations shared on the social media handle. Though it is a comical image, it has a bigger message behind it. According to reports from various studies, it has been observed that people have now stopped spending time socialising and are constantly glued to their phone screens. The image tells viewers to control their urge to check their phones and do other things with their hands. This habit of constantly keeping one's phone in their hands has not led to anything productive from anyone.