After Anushka Sharma's posts on the fifth anniversary of 'NH 10', a fan page made a humorous collage of her films and called them a genre of their own

Anushka Sharma is undoubtedly one of the most popular and beloved actors in Bollywood. She is also an accomplished producer and made her debut into production in the 2015 film, NH 10. Today, March 13, 2020, also happens to be the fifth anniversary of NH 10. To celebrate five years of NH 10, Anushka Sharma took to social media to share several images from the film, along with a heartfelt message where she revealed why she decided to turn producer for the film. After Anushka Sharma posted the inspiring message on social media, one of her fan pages decided to share a collage of her work and claimed that her movies were a 'genre of their own'. Anushka later reshared this fan post on her own Instagram story.

Anushka Sharma's fans are proud of her accomplishments; call her films a 'genre of their own'

Also Read | The year 2018 Anushka Sharma featured in the most number of films; Deets inside

Above is one of the posts that Anushka Sharma shared on the fifth anniversary of NH 10. In the post, the actor claimed that she turned producer for NH 10 out of pure instinct, despite the fact that she knew nothing about film production. However, she felt like the story was one that deserved to be told, so she felt compelled to produce NH 10.
Also Read | Anushka Sharma reacts to Sania Mirza's post about Mitchell Starc-Alyssa Healy at WC final

After reading Anushka Sharma's message, a fan page dedicated to her shared a video collage of her films on Instagram. The fan post also jokingly stated that Anushka Sharma's unique content was worthy of being called a "genre on its own". Later Anushka Sharma reposted this video on her own Instagram story and tagged it by writing, "LOL", along with a laughing emoji. 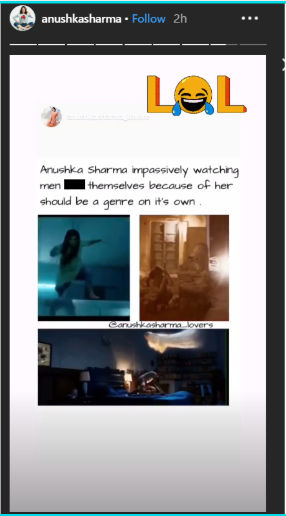 Also Read | From Anushka Sharma to Shraddha Kapoor,here's how actors give their lehengas a sassy twist