Sania Mirza had tweeted earlier on Sunday that if Mitchell Starc was Indian,he would be called 'Joru Ka Ghulam' for supporting his wife Alyssa Healy on WC final

Anushka Sharma took to her social media account and reacted to Sania Mirza's tweet from Sunday. The Pari actor jokingly approved of the ace tennis player's comment that if Australian cricketer Mitchell Starc had been an Indian, he would have been labelled as a 'joru ka ghulaam' for supporting his cricketer wife Alyssa Healy at the ICC Women's T20 World Cup Final on Sunday. Anushka Sharma, married to Team India Skipper Virat Kohli, shared a screenshot of Mirza's tweet and wrote, "Hahahah so true!!" with laughter emojis and shared it on Instagram. 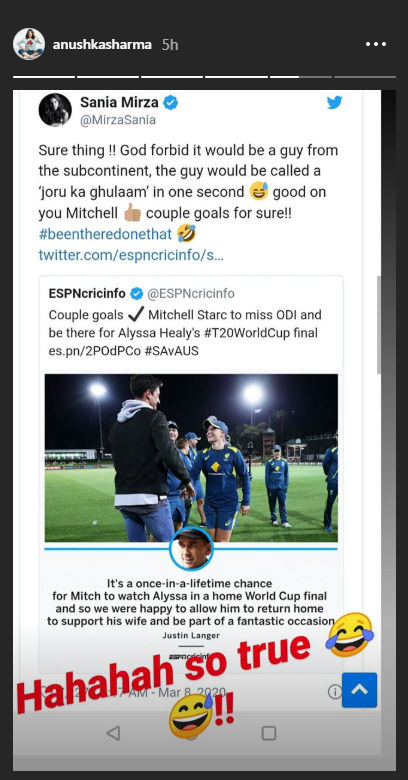 The Women’s T20 World Cup final on Sunday saw Australia Women wicketkeeper-batswoman Alyssa Healy smash the Indian bowlers to all parts of the ground in a breezy half-century. The opener smashed a 39-ball 75 to propel the hosts to a daunting 184/4, with her husband and Australian men's cricketer Mitchell Starc watching over from the VIP stands. Starc, who was part of the Australian men’s cricket team on tour to South Africa, took a break from the final ODI to watch wife Alyssa Healy play in front of her home crowd.

Sania Mirza took to Twitter to react on Mitchell Starc travelling all the way from South Africa to watch wife Alyssa Healy play in the Women’s T20 World Cup final. Sania Mirza felt that was extremely adorable of Starc to travel to MCG top watch his wife bat. However, Sania Mirza said that had it been a cricketer from the sub-continent, he would have been termed as a ‘Joru ka Ghulaam (Wife's slave)'

Sure thing !! God forbid it would be a guy from the subcontinent, the guy would be called a ‘joru ka ghulaam’ in one second 😅 good on you Mitchell 👍🏽 couple goals for sure!! #beentheredonethat 🤣 https://t.co/yl3ZlGFPkY