Salman Khan's sister Arpita Sharma welcomed her little bundle of joy on December 27th. She became a mum for the second time with her daughter, Ayat Sharma.

The Sharma & Khan's welcomed their little bundle of joy on December 27th. Second-time Mum, Arpita Khan Sharma gave birth to her daughter, Ayat Sharma. Ever since the little one's arrival, Khan's Instagram is a sight to behold, with several adorable pictures of her new-born child. Brightening up the weekend, Arpita posted yet another adorable picture of kids, Ayat and Ahil, courtesy their father Aayush Sharma.

READ: Aayush Sharma: 'It Was A Conscious Decision To Welcome Ayat On Salman Khan's Birthday'

Salman Khan's sister Arpita Sharma gave birth to her daughter Ayat on the actor's birthday on December 27 and the Khan family members posted their warm wishes and blessings for the newborn on social media. New Mum Arpita Khan, who often posts about her kids on social media, shared the cutest photo of her son Ahil with daughter Ayat. Little Ahil can be seen standing over and gazing at his newborn sister as she sleeps peacefully. 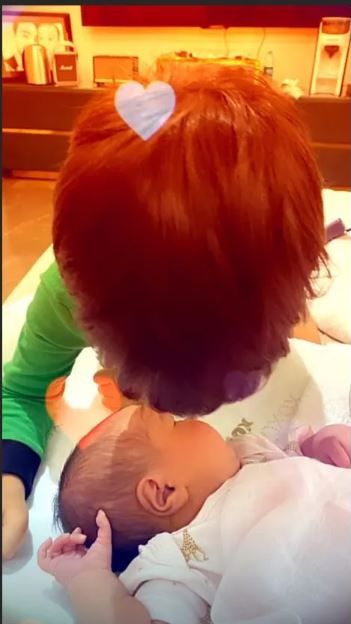 Upon their daughter’s arrival, the couple had posted a royal announcement. While the daddy wrote, “We’ve been blessed with a beautiful baby girl. Thank you so much for all the love and blessings for Ayat Sharma”, Arpita wrote, “Welcoming our daughter into the world. Grateful & Overjoyed.”

Arpita Khan Sharma tied the knot with Aayush Sharma, who starred in the film, LoveYatri. The film did not make big numbers at the box office. According to reports, Aayush will next be seen in Kwatha alongside Katrina Kaif’s sister Isabelle Kaif wherein he will be playing the role of an army officer. However, reportedly, the makers of the film revealed that it will be based on a real-life story.

LATEST NEWS
View all
2 hours ago
'Mere Desh Ki Dharti' slated to release on 14th August 2020 in theatres
1 hour ago
Unlock 2.0: Multiplex Association write to the government, urges to reopen theatres
1 hour ago
Sonam Kapoor celebrates 10 yrs of 'I Hate Luv Storys' by sharing UNSEEN pictures
1 hour ago
Unseen Pic of the day: When Sushant Singh Rajput was hard to spot on 'Chhichore' sets
23 mins ago
'We were underbilled': Soha clarifies after talking to power company over bill inflation